The Golden Masks of Power grant great elemental powers to those who wear them. Ekimu can also send visions to the users of Golden Masks. After the Toa's arrival, the Protectors led the heroes through the wilds of Okoto to claim the Golden Masks from their hidden shrines. The Skull Creatures stole the Golden Masks from several of the Toa and began stealing their energy, but the masks were reclaimed.

Kulta destroyed the Golden Masks when the Toa tried to defeat him, but Ekimu later presented the Toa with replacements.

The Skull Creatures also wear masks, but whether they possess any powers is unknown. 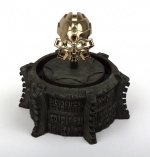