"Evoke the power of past and future, and look to the skies for an answer."
— The Prophecy of Heroes

The Mask of Time is a Mask of Power with mysterious powers kept in the Temple of Time. The ancient name for the mask is Vahi. 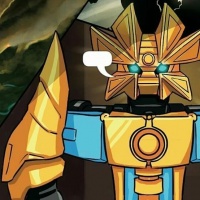 Ekimu using the Mask of Time

The Mask of Time is said to be older than the world of Okoto and the stars in its sky. It has been kept in the Temple of Time for as long as the people of Okoto can remember.

After seeing the Elemental Creatures at the Festival of Masks, Ekimu and the ancient Protectors traveled to the Temple of Time so that Ekimu could don the mask and view the future. Seeing that a cataclysm would befall the island, Ekimu then set to work creating the Golden Masks of Power for the use of the Toa.

As the island was being overrun by Skull Spiders, the modern Protectors - Narmoto, Izotor, Vizuna, Kivoda, Nilkuu, and Korgot - met at the temple to recite the Prophecy of Heroes, using the Mask of Time. They then replaced the mask and returned to their homes to await the coming of heroes.

The Mask of Time can tap into the force of time itself, and possesses many abilities that are not understood.

The mask can grant visions of the future to those who don it. According to legend, it is incomplete: while the upper half is kept in the Temple of Time, the whereabouts of the lower half are unknown.[GotT]