"Today, I will take my rightful place among the gods. It is a victory for all that is dark and unforgiving. Our ancient code demands we never reveal the prophecy recorded in the Temple of Light. Ekimu will honor that vow... even if that means the Toa will never know their true power, and darkness will rule forever."
— Makuta to his servants, The Dark Portal

Makuta the Mask Hoarder[1] (also known as Dark Lord Makuta[E]) is a former Mask Maker from Okoto, brother of Ekimu and creator of the Mask of Ultimate Power. He is currently trapped in the Shadow Realm after a final confrontation with his brother and the Toa. 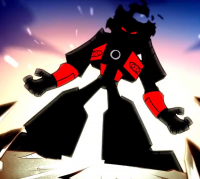 Makuta was a Mask Maker on the island of Okoto, using the elements of the land to create Masks of Power for the island's inhabitants with his brother, Ekimu. The pair were honored by the Okotans, and each owned an Airship that they used to travel across the island.[BotMM] However, Makuta's masks were less sought after than his brother's and, jealous, Makuta planned to create a mask that combined multiple elements of Okoto, violating a sacred law in the process.[2]

For some time, Makuta continued to act as ally to his brother and the Protectors of that time, and aided them in their battle with the fearsome Skull Raiders. Once the pirates had been driven into the mountains of the Region of Stone, Makuta approached them in secret and forged an alliance with their leader, Kulta, who soon pledged himself to Makuta's service. Makuta planned to rule over the Skull Raiders once he used his new mask to conquer all of Okoto.[3]

Initially, Makuta experimented with combining only two elements in a single mask that could be used by any villagers, thinking that making such power available to everyone would earn him the respect of the Okotans. An early demonstration involved Makuta lending two new masks to a groundskeeper; one mask worked perfectly, causing a tree to instantly bear fruit, but the second mask caused the tree to burst into flames, terrifying the groundskeeper. Ekimu, who had been watching, realized that Makuta had combined two elements in his masks, which they had both vowed never to do. Ekimu rebuked Makuta for his rash actions, and Makuta promised not to combine two elements in a mask again. However, Makuta resolved to go even further than two elements and combine all six elements into a single mask: the Mask of Ultimate Power. To create it, he melted down his failed prototypes and recycled them, as well as stealing a set of six Elemental Crystals from his brother. He soon saw the opportunity to demonstrate its power when he was invited to Okoto's Capital City to view an exhibition of ancient masks. He claimed that the power of the mask would mean no Okotan would want for anything ever again, but secretly, Makuta planned to use the mask to rule Okoto like a god.[BotMM]

However, when Makuta put on his new mask, its dark power amplified his feelings of jealousy and anger, turning them into pure evil. As the power of the mask flowed through Makuta, he doubled in size, scaring off the crowd, and the energies unleashed by Makuta threatened to tear Okoto apart. Ekimu, in desperation, attacked his brother, knocking the Mask of Ultimate Power from his face; the force of Ekimu's blow damaged the mask to the point that it was no longer able to contain its own power, and it shattered in a massive explosion, creating a portal to the Shadow Realm. The Capital City and Makuta were drawn into the Shadow Realm. Makuta transformed himself into a massive shadow titan and began to plot a way to reclaim his shattered mask and escape the Shadow Realm.[4]

Thousands of years later, Makuta began to project his spirit from the Shadow Realm in the form of a shadowy flame, and let loose his minions on Okoto. He first unleashed the Skull Spiders and their master, the Lord of Skull Spiders, in order to find and claim the Mask of Creation. However, the arrival of the Toa put an end to this, as the heroes fought back the Skull Spiders and defeated their Lord. Undeterred, Makuta then raised the Skull Grinder, Kulta, to lead the Skull Army, a legion of powerful undead warriors. Makuta directed them to search for the Masks of Power, but they were defeated by the Toa, who had come to the City of the Mask Makers seeking to revive the comatose Ekimu. Makuta then ordered Kulta to claim the Mask of Creation and destroy it in the forge. However, the Toa and Ekimu arrived to stop him, and Kulta was defeated, losing the Mask of Creation to Ekimu.[5]

Makuta continued to control the Skull Spiders despite the fall of the Lord of Skull Spiders, and used them to aid the Skull Raiders while they awaited his command to advance on Okoto. The pleadings of the defeated Kulta persuaded Makuta to send a Skull Spider to help him escape, and he directed the Skull Grinder to return to his home city where Ekimu and the Toa had confronted the other Skull Raiders. A fierce battle ensued and resulted in the Skull Raiders and their city being buried. Makuta abandoned Kulta beneath the rubble.[3]

The Journey to One

Makuta soon set out on a new plan, employing Umarak to recover his Mask of Control from the Labyrinth of Control. Makuta contacted Umarak several times during his efforts, warning him not to underestimate the Toa and advising him to capture one of the Elemental Creatures so as to be able to recover the mask.[6] After Umarak succeeded, the Hunter met with Makuta's spirit, who informed Umarak that he would now be serving Makuta. Umarak protested, but upon donning the Mask of Control, he fell under Makuta's influence, who used the power of the mask to twist Umarak's form into the Destroyer.[7]

Makuta commanded Umarak to unleash the Elemental Beasts, who attacked the City of the Mask Makers while Umarak sought out the fragments of Makuta's Mask of Ultimate Power. Having collected all of them, Umarak traveled to the Black Crater and prepared to open the portal to the Shadow Realm.[8] However, the Toa and Ekimu arrived and engaged Umarak in battle. In an effort to steal the fragments of the Mask of Ultimate Power and close the portal, Gali had her soul pulled from her body and drawn into the portal, where she viewed the full contents of the Prophecy of Heroes and learned what had to be done to stop Makuta's advent. Unaware, Makuta opened the portal using Umarak's body and energies. However, Gali returned through the portal as well, informing the Toa as to how they could stop Makuta permanently. The Toa combined their elements against Makuta's shadow powers. Eventually, the Toa's powers proved too much for Makuta to overcome, and they closed the portal, banishing Makuta to the Shadow Realm forever.[4]

Makuta was a skilled Mask Maker, but his masks were not as popular as his brother's, which inspired feelings of bitterness and envy. This jealousy led him to break sacred taboos and forge a Mask of Ultimate Power, which subsequently corrupted him.[2]

The Mask of Ultimate Power amplified Makuta's own inherent megalomania, driving him even further in his quest for godhood. It also caused Makuta to increase in size, becoming a figure roughly twice his former height before Ekimu's attack. Afterwards he took on another massive form with incredible dark powers. Makuta has the ability to manifest on Okoto as a shadowy flame with glowing red eyes. In this form, he appeared to Umarak during the Hunter's efforts to claim the Mask of Control. Despite his dependence on Umarak, Makuta had no real respect for the Hunter, insulting him and later betraying him in order to turn him into an even more powerful minion.[7]

Makuta wore the Mask of Control and, briefly, his greatest creation, the Mask of Ultimate Power. He carried a hammer, which he used to forge masks.[2]

After transforming into a monstrous titan, Makuta wielded a spinning headed-staff, twin blades on his wrist, and two large blades on his back. He wore a shadowy version of the Mask of Ultimate Power, despite its destruction.[4] Though Makuta was never released as an official set, models for both his original Mask Maker and transformed Shadow Titan forms were created by the BIONICLE design team. These models were both seen as inspirational models in The Makuta Challenge building contest. The first form is the one seen in media such as the 2015 Online Animations, while the second was built exclusively for The Journey to One. Shortly after it was unveiled in the contest video, the BIONICLE design team provided images of the build to serve as instructions to create Makuta.[9] The larger form is built out of parts from seven sets: 70790, 70795, 71303, 71308, 71309, 71310, and 71316, although there is no set piece for the Mask of Ultimate Power.

"I still sense evil. Makuta is out there somewhere, and his dark powers continue to grow. We must find him and stop him."
— Pohatu, Island of Lost Masks

"As strong as you think you are, I am stronger. There are events that must transpire so that I may be freed. You are Hunter no more. You are my minion. You are Destroyer."
— Makuta to Umarak, Trials of the Toa