"It is good to be on an adventure with you again! I thought Nokama would keep me locked up in the village forever."
— Macku to Takua, Mata Nui Online Game

Macku (formerly Maku) is a friendly and courageous Ga-Matoran native to Metru Nui.

On Metru Nui, Maku was not content with being stuck as a student or a Teacher. She was skilled at boat riding, and with permission from Turaga Dume, she ran her own business, called "Maku's Canoes", which offered tours of the Metru Nui coastline by boat.[3] She was the one who discovered the Dermis Turtles, and when Dume was going to ban the Rahi, she and Nokama convinced him otherwise.[4]

Shortly before the Great Cataclysm, Maku was called with the other Matoran to the Coliseum by Makuta Teridax, who was impersonating Turaga Dume. She was forcibly placed in a Matoran Sphere and went into stasis, before she was rescued by the Toa Metru and awakened on the shore of Mata Nui.[5]

Due to exposure to the effects of the Matoran Spheres, Maku shrunk physically and forgot her life on Metru Nui. After the Great Cataclysm occurred and the Matoran were taken to Mata Nui by the Toa Metru-turned-Turaga, Maku lived in Ga-Koro, which she and the other Ga-Matoran built under Nokama's lead, incorporating recycled parts from the Airships the Toa had used to traveled to Mata Nui.[6] When she met Huki, the two became close and Maku constantly tried to sneak out of her village to see him, much to the dismay of Turaga Nokama.[MNOG, Ch. 4] Despite this, she was appointed the right-hand Matoran of the Turaga.[MNOG, Ch. 3]

Five hundred years after the Great Cataclysm, Maku and Marka convinced Amaya to join a rowing club started by Kai. When a Great Temple Squid attacked their canoe, the Ga-Matoran drove it off, but it then headed toward Ga-Koro. Amaya tied up the Rahi's tentacles to try and stop it, and Macku saved her when she passed out. She later retrieved Marka's Kanohi, which had been lost when the squid attacked the boat.[T] 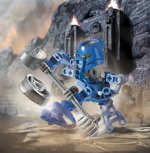 She first met Takua when he was searching for the Toa Stones. She was a champion at Ngalawa Boat Racing, but she ultimately lost to Takua.[7]

When Maku's village fell victim to a Tarakava tainted by Teridax's Infected Kanohi, she escaped and managed to find Takua to help. While he went to Ga-Koro to see the damage, she went off to search for Gali, which she succeeded in, but upon arrival to Ga-Koro was punished by Nokama for wandering away from the village, despite that it saved them, and was forbidden to leave again, lest she be injured by a Rahi.[MNOG, Ch. 3] Maku became bored during her confinement, and was later stricken with worry when she learned of an epidemic in Po-Koro, wondering worriedly if Huki was affected. When later informed that he had recovered, a deeply relieved Maku fervently thanked Takua.[MNOG, Ch. 4]

Maku, along with Onepu, Jala, Kongu, Huki, and Matoro, were traveling to a Disk throwing tournament, when Macku encountered a Nui-Jaga while scouting ahead. The Matoran managed to trap the Rahi, and then merged into a Matoran Nui to dispose of the creature.[MDC1]

Takua later met up with Maku again, this time to ask her to join the Chronicler's Company. Eager to leave Ga-Koro, Maku happily agreed, and helped the Company begin their journey to Kini-Nui by getting them through Naho Falls on her hidden boat. After they reached their destination, and the Toa Mata descended into darkness, Maku helped to defend the Kini-Nui from infected Rahi.[MNOG, Ch. 8] 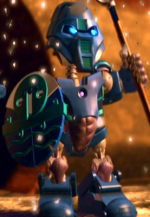 Macku in Mask of Light

During the invasion of the Bohrok swarms, Maku patrolled the waters of Naho Bay in her canoe, traveling along the coastline between Po-Wahi and Ta-Wahi.[8] When a swarm of Pahrak attacked the village, she was almost killed trying to destroy the path leading into Ga-Koro, but she was saved by Huki, who was present due to the evacuation of the Po-Matoran following the Attack on Po-Koro. She and Kotu also saved two Boxor pilots when the machines were thrown into the water, by the Bohrok overturning the lily pads. However, the Bohrok were able to make their way into the village, and the Matoran and Turaga were soon cornered.[9] Maku made a final stand along with everyone else, before the Bahrag were defeated and the Bohrok were deactivated.[10]

In return for saving her life, she taught Huki how to swim. Despite his complaints, the Po-Matoran would be grateful for the lessons after he became a Toa Mahri.[11] After the Bohrok-Kal were defeated, she was rebuilt into a stronger form resembling the one she had prior to her confinement in a Matoran Sphere. She was also awarded a name change on Naming Day, lengthening her name from Maku to Macku.[WoH, Ch. 15] Her time with Hewkii had made her a good Kolhii player, and she was appointed defender in the Ga-Koro team.[MNOG2, Ch. 1] Together with Hahli, she led Ga-Koro to victory in the Kolhii Tournament. She was evacuated from Ta-Koro along with the other Matoran during the Rahkshi attack.[12]

She later helped in the construction of Boats to facilitate her and the other Matoran's return to Metru Nui.[13] She also helped in the efforts to return the city to its previous state, as it had suffered damage during and following the Great Cataclysm. She temporarily stopped her work of reconstruction on order of Jaller, to force the Turaga to reveal where the Toa Nuva had gone, but she eventually got back to work.[14]

When Teridax took control of the Matoran Universe, Macku ran into trouble with some Exo-Toa, but was not hurt, eventually escaping. After discovering another Toa, Tuyet, she sent a special signal to Hafu and Kapura, telling them to come to an unguarded section of the Archives. Kapura arrived soon after, and the two conversed while waiting for Hafu. The Po-Matoran arrived, and Macku led the trio to Tuyet. The Toa then showed them the Nui Stone, and offered her assistance to their resistance.[RoS, Ch. 3] Macku soon returned to the surface, as her current duties prevented her from being gone too long.[15]

Macku and her fellow Matoran were freed of Teridax's tyranny when he was killed in the Battle of Bara Magna, sustaining heavy damage to his body. Macku and Tamaru went to the Archives to help Matoran crushed in the resulting quake. They dug out Taipu, and he decided to help them find survivors.[RoS, Ch. 12] Macku and all the other surviving residents of Metru Nui, which suffered severe damage, evacuated the city and relocated to Spherus Magna to begin a new life.[16]

When Vultraz and Mazeka exited a dimensional portal, a Toa resembling a Matoran greeted them, revealing herself to be Toa Macku.[BIA, Ch. 7] Accompanied by the Ga-Matoran Helryx, Macku told the history of the alternate Spherus Magna to the pair when they questioned her about it, and directed the two to see the Great Beings when they said they needed to find a way home.[BIA, Ch. 8] She handed the two Matoran over to that universe's Teridax, who guided them to their fortress.[BIA, Ch. 9]

In another alternate universe, Macku was among the survivors who evacuated the old universe after Mata Nui died and escaped to the island of Mata Nui. When Takanuva arrived in this dimension, she was the first to see him, but did not recognize him due to her having forgotten his appearance as a Toa long ago, and Takanuva's armor color change. She brought him to Axonn to see if he was a Makuta in disguise, but Axonn determined that he truly was a Toa. When Takanuva asked where he could find Jaller, she directed him to the Great Furnace.[TK]

Macku is helpful, brave and adventurous, though her desire for adventure often led her to disobey the rules of her village and sneak out. She was very close with Hewkii on Mata Nui and idolized him, even keeping a doll of him in her hut. Macku has many talents, such as boating, swimming and Kolhii.[MNOG, Ch. 4]

Macku can swim better, and hold her breath longer than non Ga-Matoran. 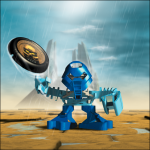 1390 Macku was first released in September 2001 as Maku, and was one of the six "Tohunga" released as McDonald's promotional BIONICLE toys. This eight-piece Macku set depicted her form following her arrival on Mata Nui (and diminishment as a result of her time in a Matoran Sphere) but before The Rebuilding, and included a Bamboo Disk patterned with Gali's Kanohi Kaukau and the mask's name. The Macku set could fling the disk if one pulled back and released the right arm which held the disk.

8586 Macku was next released in 2003 as one of the six small sets, which that year were the Matoran of Mata Nui in their newly rebuilt bodies. The twenty-five piece set featured a gear on its back which one could spin to cause the torso to swing, allowing Macku to swing her included Kolhii Stick and hit the puck-like Kolhii Ball, also included. 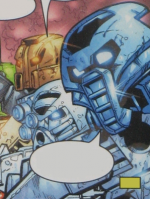