The BIONICLE storyline depicts many Locations ranging from planets to villages.

The Solis Magna system is a solar system located within the Galactic Universe. It is based around a star, Solis Magna, and includes Spherus Magna and other planets with sapient inhabitants.[1]

Spherus Magna was the planet of the Great Beings and the origins of the Energized Protodermis, but was shattered at the end of the Core War into three fragments. It was later reformed through the efforts of Mata Nui, and is now the home for the Agori, Matoran and other species previously residing on Bara Magna and the Matoran Universe. 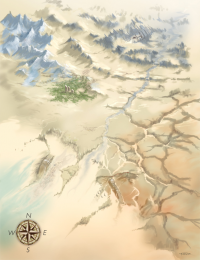 Valley of the Maze

After the Shattering, Aqua Magna became its own planet orbiting Solis Magna.[2] It was here where the Great Spirit Mata Nui, whose robotic body housing the Matoran Universe, crash-landed on, creating the island of Mata Nui and later the location where Voya Nui rested on. 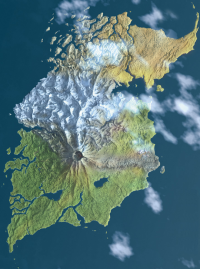 An aerial view of Mata Nui

Mata Nui was a large, tropical island that covered the face of the slumbering Mata Nui. Matoran resided on it for nearly 1,000 years, but the island was later deserted after the rediscovery of Metru Nui. The island was returned to its original, barren state by the Bohrok, and was penetrated and destroyed when the Great Spirit Mata Nui awoke.

The former island of Voya Nui.

Voya Nui, also known as the "Daggers of Death," was a highly dangerous and low-resource island located south of Mata Nui. Voya Nui was once the central region of the Southern Continent, but during the Great Cataclysm, it was dislodged from the Great Spirit's body and rocketed to the surface of Aqua Magna. It has since returned to the continent. Below are some of the unique locations of Voya Nui.

Formerly a coastal city built on hardened molten Protodermis from Voya Nui's Mount Valmai, Mahri Nui sank beneath the sea, linking with the island above with a narrow stone formation called The Cord. The city was destroyed when Voya Nui returned to its position on the Southern Continent. Below were some of the geographical locations on Mahri Nui:

After The Shattering, Bara Magna became its own planet. There is only one known unique location to the planet during this period, which is the Wastelands.

The Great Spirit Robot housed the Matoran Universe inside its massive body before its destruction in the Battle of Bara Magna. 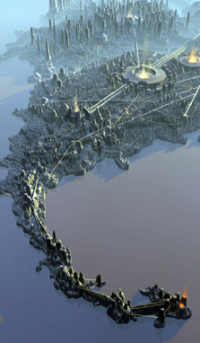 Metru Nui was a city that many Matoran lived on for centuries before they immigrated to Mata Nui. It was ruined by the Great Cataclysm after Teridax emptied the city's only power source, the power plant. After 1,000 years, the Matoran of Mata Nui returned, and the city was restored by the Staff of Artakha. The city was then assaulted in the Siege of Metru Nui, and later severely damaged and abandoned after Teridax's death.

The Northern Continent was a large landmass located south of Karzahni. It included the Tren Krom Peninsula, and was mostly populated by Matoran.

Below is a list of geographical locations on the part of the continent named Voya Nui:

A Stalactite Village of Karda Nui

Karda Nui was the core and power source of the Matoran Universe, located beneath the Southern Continent. It was here that the Ignika could to be used to save the life of the Great Spirit Mata Nui. The Av-Matoran colonized it briefly before the Energy Storms first struck, after which it became uninhabitable. Following the Great Cataclysm, Karda Nui was partially flooded with water from Aqua Magna, causing the floor of the cavern to become a swamp. When the Great Spirit was reawakened, the Energy Storms destroyed the swamp and almost all other matter in Karda Nui.

Odina was the base of the Dark Hunters, which is situated on an island barricaded by tall cliffs. The base had many training facilities for Dark Hunters to practice their skills. Below are some locations of Odina:

Daxia was the largest base of the Order of Mata Nui. The island was a hot, tropical paradise with dangerous Rahi and plants, and was equipped with strong weapons to defend itself, if needed.

Destral was the largest base of the Brotherhood of Makuta, and was armed with many traps and hidden weapons, to prevent intruders. Large amounts of Energized Protodermis could also be found here. 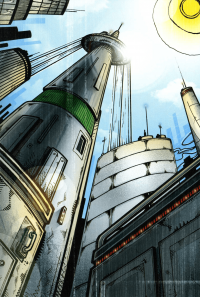 Xia was the homeland of the Vortixx. It was a mass producer of weapons for many organizations, including the League of Six Kingdoms before its destruction, the Brotherhood of Makuta, and occasionally the Dark Hunters, along with other islands which are willing to pay. Xia also housed a giant, living mountain, named "The Mountain".

Artakha was a legendary refuge for good workers ruled by Artakha, a being of the same name. This island was home to the world's best Matoran carvers, who have created many famous artifacts. The island was hidden away from the outside world after an invasion from the Brotherhood of Makuta.

Karzahni was where damaged or injured Matoran used to be sent and be fixed, although all attempts by the land's ruler, Karzahni ended in failure. He eventually gave up in frustration and blamed the Matoran for his inability to fix them. The location passed into legend, and was said to be the place where bad or poor workers were sent for punishment. The Toa Nuva later evacuated all the Matoran from Karzahni, and Gali Nuva leveled most of the region with a Nova Blast during a battle.

Zakaz was the homeland of the Skakdi. It was mostly destroyed by its residents after a failed experiment performed by Spiriah led to a civil war.

Stelt was the homeland of Krekka, Gladiator, and Sidorak/Voporak's species.

Artidax was an island to the south of the Matoran Universe which had several active volcanoes. Makuta Miserix was once imprisoned here.

Nynrah was the island from which the Nynrah Ghosts Matoran, highly skilled crafters, came from.

Visorak was an island formerly inhabited by Tobduk's species, and the birthplace of the spider-like Rahi Visorak.

Tren Krom's island was a barren piece of rock serving as the location of Tren Krom's incarceration.

The Red Star is a space station manned by the Kestora, which traveled with the Matoran Universe from planet to planet. It is currently in orbit around Spherus Magna.