"Cahdok and Gahdok do not need the swarms -- with this power, we can return Mata Nui to the before-time."
— Lehvak-Kal, Absolute Power 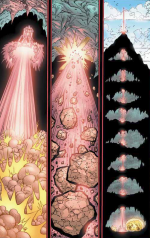 Lehvak-Kal was originally an Av-Matoran who was destined to transform into a Lehvak. At some point the Bahrag exposed this Lehvak to a mutagenic substance, and it transformed into Lehvak-Kal.

Lehvak-Kal was the one who rendered Onua powerless by stealing his Nuva Symbol. It, accompanied by Tahnok-Kal, also stole Gali Nuva's symbol. It also helped stop the Toa Nuva from finding their Kanohi Nuva, under instructions from Tahnok-Kal.

Later, Gali, Kopaka, and Lewa merged into Toa Nuva Kaita Wairuha to combat the Bohrok-Kal. However, Lehvak-Kal called for Gahlok-Kal and Kohrak-Kal to form a Kaita of their own. When the Bohrok-Kal Kaita Ja formed, it attacked and defeated Wairuha Nuva, and then separated back and left the Toa Nuva.

After the Bohrok-Kal discovered where the Bahrag were hidden, they journeyed there with the symbols, the Toa Nuva following them. When Lehvak-Kal and the others got to the caves, they found the Exo-Toa empty, which fought them and which the Bohrok-Kal destroyed. They then proceeded to place the symbols on the Nuva Cube. To protect itself from harm at that moment, an energy field appeared around the Kal and the Krana-Kal turned silver.

However, using a technique of will through their connection to the symbols, the Toa Nuva symbols sent a burst of power through the Bohrok-Kal. Lehvak-Kal's vacuum power overloaded, shooting it straight upward through the above ground and all the way into a low orbit around Aqua Magna where its orbit was going to eventually decay and it would burn up in the atmosphere of the planet.[3] The blasts of gravity power from Mata Nui and Makuta in the Battle of Bara Magna, as well as the movement of Aqua Magna accelerated this process and it was soon destroyed. [1]

Lehvak-Kal was fast and unpredictable. One of the deadliest Bohrok-Kal, it relied on ambush, clever tactics, and surprise to attack its enemies. It usually stayed in Le-Wahi so it could disappear behind the jungle trees.

With its Vacuum Shield, Lehvak-Kal could suck all the air of the surrounding area and shoot it back out in a single, titanic blast.

8576 Lehvak-Kal was released in the spring of 2003 and contained forty pieces. Each set typically included a randomly packed metallic green Krana-Kal, though seventy-two random Bohrok-Kal sets were packed with sterling silver Krana-Kal and 5000 with white metal Krana-Kal. Pieces from Lehvak-Kal can be combined with those of Gahlok-Kal and Kohrak-Kal to create Bohrok-Kal Kaita Ja.