Kyry became part of the crowd that arrived to combat the Rock Tribe and take control of Roxtus.[citation needed] After their defeat, he moved into the Mega-Village with the other Agori, until Raanu ordered its evacuation. He then witnessed Mata Nui battle Makuta Teridax and reform Spherus Magna. He now resides on the reformed planet.[5] 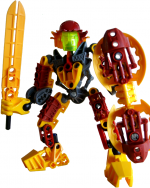