"I am doing the same thing Toa do. I am saving one who cannot save himself."
— Rahaga Kualus, Challenge of the Hordika

Kualus is the Toa Hagah of Ice previously assigned to Makuta Teridax, and formerly one of the six Rahaga.

Kualus was at one point transformed into a Toa, and served with a Toa team. When the Visorak Horde was assembled by the Makuta, Kualus witnessed one of their conquests and came out as one of the first to see them and survive. When the Brotherhood of Makuta decided that Makuta Teridax needed Toa bodyguards, Kualus was selected as representative Toa of Ice. He was endowed with metallic armor to indicate his status as an elite Toa and his former teammates presented him with his current Mask of Rahi Control as a badge of honor.

Kualus's new Toa team performed this task well, protecting Teridax from everyday threats like Rahi intrusions. Upon team leader Norik's discovery that the Brotherhood had stolen the Kanohi Avohkii, the mask of Light to further the plan for universe domination, the Toa Hagah raided the Destral Fortress. During the raid, four Toa Hagah, including Kualus, were captured and subsequently mutated by Roodaka into shrunken creatures with the heads of Rahkshi. They were eventually rescued by the two remaining Toa Hagah, Norik and Iruini, who were also mutated during the rescue mission.

Kualus in Web of Shadows

Kualus joined Norik in rallying the Rahaga, who were grief-stricken over their repulsive new forms. Working together, the Rahaga proceeded to sabotage the operations of the Brotherhood's Visorak army in various locations around the Matoran universe. Finally, about 1,050 years before the time of the Toa Nuva, their efforts took them to Metru Nui, where they hid the Avohkii in the Great Temple. From their hiding place in the Onu-Metru Archives, they watched Teridax, their former employer and old enemy, conquer the city. They witnessed the valiant struggle of six novice Toa Metru that led to Teridax's defeat and imprisonment. And then they noted, horror-stricken, that the Toa subsequently left the dead city, rendering it defenseless against the onslaught of the Visorak. By the time the Toa Metru returned, the Visorak had largely conquered the city. The Rahaga mobilized, but were unable to stop the Visorak from adding the Toa Metru to their list of trophies.

The Rahaga rescued the newly-formed Toa Hordika from certain death, educated them about their new abilities and tools, warned them of the threat of the Visorak, and aided them in their quest to rescue the Matoran. Kualus accompanied Toa Hordika Nuju, whom he frequently annoyed by persistently speaking to Rahi in their native language. During their adventures, Kualus once found himself hanging from a Chute with one hand while beating back oncoming Visorak with his staff. After being rescued by Nuju, Kualus summoned a huge swarm of Ice Bats to distract the Visorak. He also called in a pair of Gukko, and was possibly one of the first to ever ride those gigantic birds. Over the course of their adventures together, Kualus taught Nuju the bird Rahi language.

Kualus participated in the capture of the Tower of Toa. Later, Kualus unsuccessfully attempted to prevent Nuju from being lured into an Oohnorak trap, as they were scavenging for materials. As they made their escape through the Archives, Kualus explained the Rahaga's plan to Nuju. Shortly afterward, the pair was ambushed by a Kahgarak, blown through a wall, reunited with Toa Hordika Whenua and Rahaga Bomonga, and buried alive in an avalanche caused by Whenua. While unconscious, Kualus dreamed of Toa Hagah Norik and Iruini's final, desperate rescue mission.

After constructing the Airships, Kualus and the other Rahaga went to the Great Temple to translate texts referring to Keetongu. There, along with four other Rahaga, Kualus was captured by Toa Hordika Vakama, who had given into his Hordika side. During the Battle of Metru Nui, the five were rescued by Norik, and all six participated in the final struggle. After the Toa Metru left Metru Nui with the Matoran, Kualus and the other Rahaga stayed in Metru Nui with Turaga Dume to help rebuild the city. At one point of time, they fought off a small band of Visorak that came to Metru Nui. They frequently left to aid other islands that had been ravaged by the Visorak, but returned momentarily to Metru Nui to welcome the Matoran, Turaga, and Toa Nuva when they returned.

Later, the Rahaga went to the island of Xia to deal with a battle between the Kanohi Dragon and a Tahtorak. When they arrived, the Toa Nuva, who were already on the island, had captured Roodaka and forced her to transform the Rahaga back into their Toa Hagah forms.

After they were transformed back into Toa Hagah, Kualus waited for Norik to slow the Kanohi Dragon down before he finished it off with an Ice attack. After hearing of Gaaki's vision, Kualus communicated with a nearby Smoke Hawk to check the horizon, and when the bird Rahi reported back that Dark Hunter ships were coming, Iruini rashly teleported onto one of the approaching ships.

Kualus was then teleported to the ship himself, along with the other remaining Toa Hagah, by a tall, gold-colored being. Once there, Toa Helryx introduced herself as the leader of the Order of Mata Nui, and tasked the Toa with hunting down Makuta Teridax. Though they disagreed at first, they eventually accepted the mission, and with Zaktan as their guide, being to depart. However, Gaaki then experienced another vision from her Mask of Clairvoyance, stating that the place they were going was one of death and that one of them would not return. The Hagah later traveled to Metru Nui, as Zaktan had instructed them to destroy the Coliseum, where they hoped to find Teridax. They clashed with the Toa Mahri, who attempted to defend the structure, until Kualus used his Mask of Rahi Control to summon a beast from the Archives to help Bomonga defeat Nuparu. He later lost control of the beast after Toa Hahli attacked him, and the Toa were forced to unite to protect the city. Kualus and his teammates convinced to Mahri to ally with their cause, and eventually journeyed underneath the Coliseum after helping to lift it with his ice powers, sealing their trail behind.

Upon journeying through the tunnel, the team came across a inscription on the wall in a language which none of them could recognize. Pouks commented on that their mission had not been as dangerous as they had believed so far when suddenly, the Hagah were magnetically drawn to the walls, while molten Protodermis streamed rapidly down the tunnel to destroy the Toa who were unable to escape.

When their death seemed imminent, the ceiling was partly removed by Makuta Miserix who looked like a very large lizard. The Hagah and Zaktan were teleported by his powers into another chamber, with a significantly smaller form of Miserix. Once the Makuta identified himself, Kualus and Bomonga immediately prepared for battle, although Norik gestured for them to not attack. After a brief chat on how both the Hagah and Miserix had arrived in the tunnel, Miserix journeyed further into the tunnel. The Hagah went along as well, and they eventually came upon a room filled with machinery, and two corpses. Kualus and Bomonga inspected the corpses and, intrigued, Miserix studied a section of one of the corpse's armor to find out that it was not made of Protodermis. However, their short discussion about this was halted by the emergence of portal behind them, through which four beings arrived. The beings turned out to be Toa Helryx, Keetongu, Axonn, and Brutaka. After a short conversation, Teridax divulged his presence to them by shooting an energy bolt at Brutaka's Olmak, destroying it. He then killed Zaktan by destroying his tank using a sonic hum.

Miserix tried to obliterate the machinery, but was stopped by Brutaka, who explained the true nature of Mata Nui and that they were within his mind. Miserix attempted to attack the machinery again, but Teridax stopped him and concealed him in an illusion. After this, Teridax meddled with all of the Toa Hagah's minds, encasing them in an illusion where they thought they had won and that peace reigned throughout the universe. The Toa then left the area.

Afterwards, the Toa Hagah patrolled the city, believing all to be well, until Tren Krom, in Lewa's body, arrived and dispelled the illusion from their minds. Kualus and his fellow Toa then joined the resistance. When the Great Spirit Robot was heavily damaged following the Battle of Bara Magna, Kualus and the surviving residents of the Matoran Universe migrated to Spherus Magna.[1]

Kualus and the other Toa Hagah took a mission from Kopaka to observe the Toa Mahri, whom the Toa Nuva of Ice reported were behaving strangely in the company of several Skakdi and a strange, powerful creature.

In this alternate universe, Toa Kualus never received metallic armor to differentiate him as an elite Toa Hagah because the concept of Hagah did not exist. As such, he wore the white armor and a white Kanohi, customary to Toa of Ice.

Accompanied by Toa Bomonga and mounted on a Muaka, Kualus served as the escorts of Matoran Jaller, who retrieved the Vahi from Artakha. On the journey back to Metru Nui, the company was intercepted by Toa Takanuva, who managed to convince the pair that he was a Toa sent by Tuyet to protect them from somebody who was attempting to steal the Vahi. Bomonga reacted aggressively to Takanuva, but Kualus allowed him to join them. However, after Takanuva claimed the being attempting to steal the Vahi was Brutaka, the two Toa realized he was lying, as Brutaka was killed by Bomonga personally a time earlier. A short time later, Bomonga and Kualus attempted to kill Takanuva, only to be blown away by Toa Lesovikk's Air power.

As a Toa of Ice, Kualus can create, control, and absorb ice. This also gives him the ability to create snowstorms, to travel via ice bridges and more. These abilities were lost when he was turned into a Rahaga, but he has since regained his powers.

Sickened by his change into Rahaga, but extremely determined, Kualus worked to save flying Rahi. He can communicate with them via the language of the flyers, a complex language of clicks, whistles, and other sounds.

As a Toa Hagah, Kualus carries a Sub-Zero Spear, a Rhotuka Launching Shield, and wears the Great Kanohi Mask of Rahi Control, which allows him to control multiple Rahi at once.

While a Rahaga, Kualus could play his staff like a flute to summon flying Rahi or communicate danger to them. As a Rahaga, his Rhotuka latched onto flying Rahi and carried them back to him. 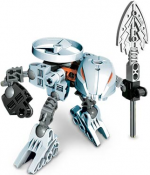 Kualus was released as a small set as a Rahaga in 2005, containing twenty-eight pieces and a white Rhotuka spinner. He could be combined with Gaaki and Pouks into an Ice Vermin.

"You are very wise, Toa, but in this new world, wisdom is not enough."
— Rahaga Kualus to Toa Hordika Nuju, Vengeance of the Visorak

"You see, Nuju, there is something to be said for speaking to Rahi, and not just at them. If the Onu-Matoran had learned that, they might have had less trouble in the Archives."
— Rahaga Kualus to Toa Hordika Nuju, Challenge of the Hordika

"Our bodies have been changed, but not our hearts. Not our spirit. No matter how we look, every breath we take, we take as heroes in the service of Mata Nui."
— Rahaga Kualus to his fellow Rahaga, Web of Shadows