The first game of Kolhii on Mata Nui was the inspiration of Turaga Onewa and Turaga Whenua. It was meant to settle a clash between Onu-Matoran miners and Po-Matoran carvers after one of the miners commented on the quality of particular carvings.

The Po-Matoran took offense at the statement and blamed the miners for poor quality stone. The dispute worsened until rocks, shovels, and hammers started being hurled between the two camps, forcing the Turaga to intervene.

To settle the conflict, they developed the idea of a competition, according to 10 basic rules. The 11th Rule, or the so-called "New Rule," came into place when some fields began to suffer from attacks by dangerous Rahi. The rule was further expanded with the Onu-Koro Addendum after an incident involving the local Ussalry during a Mounted Crab match.

The original version of Kolhii (Koli)

On Mata Nui, Kolhii (known as 'Koli' at the time) was originally played primarily in Po-Koro, and it involved simply kicking a stone ball into another players' goal post. There were usually four goals, and hence four players, in each game. Shortly after the arrival of the Toa, a Po-Matoran Trader named Ahkmou began selling a new Kolhii Ball called the Comet, which was very popular and of excellent quality according to the local players. Shortly afterwards, a terrible sickness took hold of the Po-Matoran. It was later discovered by Takua the Chronicler that the Comet balls were infected and came from a Nui-Jaga nest. Takua and Pohatu destroyed the nest and the present Comet balls. The balls in the village were thrown into the sea and the Po-Matoran taken ill recovered. Ahkmou briefly disappeared after the incident.

During the time of the Bohrok Swarms, the game developed into what is now called Kolhii. This changing of the game is commonly attributed to an incident that occurred during the Pahrak invasion of Ga-Koro, when Hewkii saved Macku from a falling rock with a Ga-Matoran Fishing Staff. Since then, players have taken up the use of the Kolhii Stick and the rules have been changed accordingly.

Kolhii has become a staple of Matoran life, and a great occasion for celebration. Variants of the sport include an Onu-Koro version played on Ussal crabs and an aerial version played by Le-Matoran flying on Gukko birds.[1] Many believe it to be a fitting representation of the Three Virtues. It is particularly important to the Po-Matoran, who had become undisputed champions season after season. Pohatu, Toa of Stone, is the patron Toa of Kolhii.

After the defeat of the Bohrok-Kal, the Turaga announced a great Kolhii Tournament to celebrate the newfound peace for the Matoran of Mata Nui. The tournament took place between all the villages, each of which was represented by a two-Matoran team. The event ended after it was won by Ga-Koro in a three way match at the Ta-Koro Kolhii Stadium. 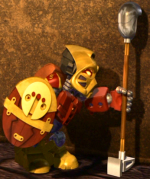 Kolhii equipment, as seen in Mask of Light

The equipment used in the current game of Kolhii are the Staffs, Shields, and Balls. The staffs are sticks with a hammer on one end and a hurler on the other. The shields are used by the goal-keepers, and are often decorated with symbols representing their village. The players are allowed to use these and any part of their bodies, except their hands. Kolhii Balls are made from lightweight airstone bound in steel, and are ejected from the middle of the field during the game.

Pohatu is the patron Toa of Kolhii

On the island of Mata Nui, each village had its own two-Matoran team, which represented the village in the Kolhii tournament. The teams were as follows:

The original version of the game can be unlocked in BIONICLE: Quest for the Toa by entering "5MG834" as the name of one of the saved files.

"Koli is the greatest sport on Mata Nui. It's incredibly simple, but takes much more skill than what they play in other villages!"
— Epena, Mata Nui Online Game