"Takua always said that he started whispering whenever he crossed the border into Ko-Metru, he had no idea why."
— Narrator, Time Trap

Ko-Metru, also called the "quiet Metru," was the district of Metru Nui representing Ice. It is one of the western regions between the borders of Onu-Metru and Po-Metru. This was the home of Ko-Matoran who study, observe, and look into the future to predict and research prophecies by reading the stars above Metru Nui to discern the future.

The Ko-Metru skyline in the Vahki Promo Animations

Ko-Metru was once a prosperous region of Metru Nui, home to the vast Knowledge Towers and Towers of Thought and many Matoran. The dominant building of the city was a massive complex of Knowledge Towers at the heart of Metru. The Ko-Matoran were obsessed with the future, always looking to the stars for clues. Vahki were also present sometimes when projects were done, so that the Matoran were not distracted by loud noises and could concentrate on what they were doing.

During the Matoran Civil War that ravaged Metru Nui, Ko-Metru's population of Ko-Matoran joined with the Po-Matoran and Le-Matoran when their independent intervention failed, until the war ended with Teridax causing the Archives Massacre by locking the armies in the Archives and freeing its Rahi on them.

During the Morbuzakh attacks on Metru Nui, Ko-Metru was the least affected as the vines were vulnerable to the cold. A month prior to the Great Cataclysm, Toa Mangai Lhikan went to one of the Knowledge Towers and gave a Toa Stone to Nuju to become one of the Toa Metru, who was looking through his telescope at the time. After the Toa Metru were branded impostors and three imprisoned, the remaining Toa - Vakama, Nokama and Matau - traveled to Ko-Metru via a Chute, but they were forced to get off as the Dark Hunters Nidhiki and Krekka had the Chute Station Attendant reverse the flow of the Chute System. While in Ko-Metru, Vakama combined the Great Disks into the Disk of Time, and also saw Toa Lhikan's Spirit Star heading toward Po-Metru and decided to follow it.

When the Great Cataclysm struck, many of the Knowledge Towers toppled over, destroying much of Ko-Metru. When the Toa Metru returned to Metru Nui, they were transformed into Toa Hordika by the Visorak who have taken over the city. To find a cure, they took the Rahaga's advice and sought out the legendary Rahi Keetongu. After following a clue in the Great Temple pointing to Ko-Metru, the Toa Hordika, minus Vakama, who had joined with Sidorak and Roodaka, and Rahaga Norik ventured there in search of Keetongu. They discovered the Ko-Metru Hideaway, and inside it Keetongu, who agreed to help them attack the Coliseum after hearing their story and devotion to saving Vakama.

About 1,000 years later, the Matoran, Turaga, and the Toa Nuva returned to Metru Nui. After Ta-Metru was repaired, work on rebuilding Ko-Metru began. During reconstruction, several Ko-Matoran stayed in Po-Metru until their homes were repaired. Ko-Metru was fully restored later by the Staff of Artakha to its former self once again.

Along with the rest of Metru Nui, Ko-Metru was greatly damaged when a fragment of Aqua Magna impacted the Core Processor during Teridax's battle with Mata Nui. The surviving Matoran evacuated the Matoran Universe for the surface of Spherus Magna. Later, Ko-Metru, along with all other locations in the Matoran Universe, was dismantled.[OGQ: Dec 13 2010, 04:34 PM][1] 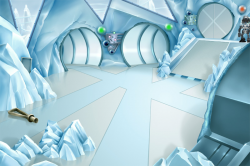 Talvi at the Ko-Metru Chute Station 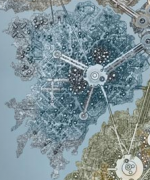