"We traveled all over the island just to end up here?"
"Why not? It's a special place."
— Takua and Jaller, Mask of Light

Kini-Nui is an element of the Great Spirit Mata Nui's planetary exploration system. Once deployed, it assumes the form of a temple, from which the meaning of its name, "Great Temple", is derived.

The Kini-Nui was created and installed by the Great Beings during their construction of the Great Spirit's planetary exploration system. The main function of its spires is to be sensors for Mata Nui, informing him of surface events while he was observing a planet. Another function is to allow residents of the Matoran Universe safe passage to his exterior if needed, through a passageway covered by the Suva Kaita. Kini-Nui was retracted each time when the Great Spirit left a planet and extended each time when he landed.[citation needed]

When the Great Cataclysm caused the accidental deployment of the Great Spirit's camouflage system, the spires of Kini-Nui were deployed, piercing through the center of the newly-formed island of Mata Nui. Makuta Teridax had inadvertently constructed his Mangaia lair near the Kini-Nui mechanism. This allowed the lair to be accessed through the Suva Kaita.

The Amaja-Nui and other architecturally decorative elements of temple were built shortly after the Toa Metru and Matoran of Metru Nui came to the island. The exterior of Kini-Nui consisted of two distinct regions, an upper area that contained the Suva Kaita and a lower area that consisted of the Amaja-Nui. As part of its design, the Turaga made it so that only the assembled Makoki Stone could open the entrance to the tunnel underneath the Suva Kaita. For most of its history since then, it was used mainly by the Turaga to hold meetings and to recount legends, such as The Legend of Mata Nui.

Shortly before the arrival of the Toa Mata, the wandering Av-Matoran Takua traveled around Mata Nui completing various quests. In the process he gathered the six Toa Stones the Toa Metru had created, and was told by the Turaga to arrange them in Kini-Nui. When he did this, an enormous beam of energy was released into the sky, which blasted Takua away from the temple, erasing his memory in the process, and summoned the Toa Mata's Toa Canisters to the island.

The Turaga held at least one conference at the temple shortly after this, in which they told the stories of what had happened recently to Toa Mata Lewa and Gali.

At the end of the Toa's search for the Kanohi, the Toa gathered at Kini-Nui after Kopaka saw the place in a vision. There they found six life-size carvings of themselves, onto which each Toa placed all six of his or her Kanohi. Each mask disappeared after being placed on the carving's face, and shortly after all six had gone a Golden Kanohi appeared on each Toa's statue. At the same time, each Toa received one of six parts of the disassembled Makoki Stone, which they then assembled into the whole stone, unlocking the tunnel to Mangaia.

At this point, Takua arrived at the temple again, this time with a group of six Matoran known as the Chronicler's Company, which he had gathered at Turaga Nuju's instruction. The Toa had been discussing what to do about the temple while they were below, lest it be overrun by Rahi and leave them trapped underground, and Gali suggested that Takua and the Company would defend Kini-Nui while the Toa battled Teridax. Tahu charged them with this duty and the Toa then descended into Mangaia.

Shortly after the Toa left, the Company was attacked by infected Rahi and the Battle for Kini-Nui began. The Matoran fought off several waves of Rahi on their own, using disks to knock off their Infected Kanohi, until finally they were severely outnumbered and almost overwhelmed. However, they were relieved at the last moment by the arrival of the Gukko Force, Ussalry, and Ta-Koro Guard, whose combined might was enough to defeat the Rahi.

After battling Teridax, the Toa returned to the surface via Kini-Nui, but they were forced to leave almost immediately after they heard something ravaging the jungle around them and Kapura came to them asking for help, causing them to leave for Ta-Koro.

After the defeat of the Bohrok-Kal, the Turaga gathered all the Matoran at Kini-Nui to teach them how to rebuild themselves, using Takua and Jaller to model the new forms.

When the Mask of Light was discovered, Gali Nuva went to meditate at the Amaja Circle. She was present as a Guurahk, a Lerahk, and a Panrahk, sent by Teridax to find the Mask, emerged from the Suva Kaita, destroying it in the process. The three Rahkshi attacked her, but she was able to escape by diving into the stream at the bottom of the valley.

The Avohkii, in the keeping of Jaller and Takua, eventually led the two Matoran back to Kini-Nui. All six Rahkshi confronted them, but the six Toa Nuva arrived almost immediately and formed a ring around Jaller, Takua, the Avohkii, and the Amaja Circle. In the battle that ensued, the Toa were able to defeat all the Rahkshi but one, a Turahk, who attacked the two Matoran. To protect Takua, Jaller threw himself onto the Turahk's staff and was killed within seconds of grabbing onto it as a result of being struck by the Rahkshi's full power of Fear. Inspired by Jaller's sacrifice, Takua then realized that he himself was the Seventh Toa, put on the Avohkii, and became Takanuva.

As a demonstration of his power, Takanuva trapped the Turahk in a column of light and then directed his staff at the Toa head statue, breaking it apart and revealing a giant statue of a Pakari underneath. The next day, Takanuva oversaw the construction of the Ussanui from pieces of the Rahkshi. He then parted with the Toa Nuva and Hahli and used the vehicle to fly down to Mangaia, using the same tunnel that the Rahkshi had used to come up.

Hahli at Kini-Nui in the Mata Nui Online Game II: The Final Chronicle

Unknown to Takanuva, Hahli had hidden in the Ussanui. Soon afterward, Hahli emerged from the tunnel and persuaded the Toa, Turaga, and Matoran to come down with her, as Takanuva had instructed her to do. They did, again using the tunnel under the place where the Suva Kaita had been.

The newly reawakened Bohrok swarms since destroyed all the Matoran-made parts of Kini-Nui, but the foundations and spires created by the Great Beings remained. When Mata Nui awoke, the pillars came tumbling down and the temple was split with the island and fell into the sea. Because the Toa Nuva jolted the Great Spirit awake instead of using the normal method, Mata Nui's system was overridden and all non-essential systems were ejected, which included the spires and the foundation. Despite this, the structure could be recreated by the camouflage system. 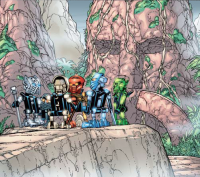 Kini-Nui was located at roughly the center of Mata Nui, in a valley to the west of the Mangai Volcano. It was situated above a ravine, whose breadth was spanned by the bridge joining the two halves of the temple.

On one side of the valley was the upper temple area, which included a tall temple with four spires, at the center of which was the Suva Kaita. This area included six life-size carvings of the maskless Toa Mata.

On the other side of the valley was the lower temple area, which included the Amaja-Nui and a giant statue of a Toa Head. The Amaja-Nui was essentially a raised, larger version of the Amaja Circles found across the island and was used for the same purpose, to recount legends. The Toa head was later destroyed by Takanuva to reveal a giant statue of the Pakari worn by Takua.

The valley itself was forested, and tropical plants were often shown growing on the various parts of Kini-Nui. Many tall, pointed rock spires filled the area surrounding the temple. At the bottom of the valley, running between the two halves of Kini-Nui, was a stream that turned into a waterfall not far from the temple. 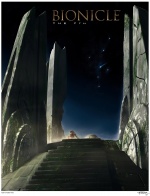 Kini-Nui by night, beneath the presumed Spirit Stars of the Toa Mata and Takanuva

There were a number of ways of reaching Kini-Nui, though only one has been shown explicitly. Whatever route one took, it was said to be very difficult to reach.

The path taken by the Chronicler's Company began behind the Naho Falls in Ga-Wahi, where there was a cave that led into a tunnel. The tunnel ended on a cliff beside a ravine, across which was a small forest. Beyond the forest, one crossed a rocky canyon and came to a snow field, in which was a giant carving of a Toa head, known as the Gate of Ice. The gate could only be opened with a key, but once one had crossed it, one emerged into the jungle around Kini-Nui. 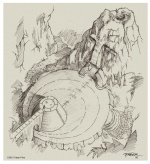 A concept sketch of Kini-Nui