The printable version is no longer supported and may have rendering errors. Please update your browser bookmarks and please use the default browser print function instead.

"Good Kardas. Nice devastating monster. Are you my favorite engine of destruction? Yes, you are."
— Vezon, Inferno

The Kardas Dragon is a giant dragon Rahi that was transformed from Fenrakk by the Kanohi Ignika.

The Kardas Dragon was created by the Kanohi Ignika when Vezon and Fenrakk fell into molten lava during their fight with the Toa Inika. Vezon rose out of the lava with a new steed, which he named Kardas.

The following battle eventually tipped in Vezon and Kardas' favor. Just before the final blow could be dealt, Jaller ordered Kongu to use his Mask of Telepathy to reveal the Ignika's true feelings to Vezon. Angered, the deranged Piraka pointed his Spear of Fusion at Matoro, preparing to launch its energies at the Toa of Ice. Before he could, Jaller launched a Zamor he received from Axonn. The Zamor froze Kardas and his rider in a stasis field. This allowed Matoro to take the Mask of Life from the back of Vezon's head, separating the Piraka from Kardas in the process. When the rest of the Piraka confronted the Inika, the Ignika made Kardas fire one last blast at Matoro, causing him to lose his grip on the mask. It then flew to the island surface and plunged into the sea.[2]

Freed from the Ignika's powers, Kardas and Vezon went different ways, Kardas eventually making its way to the surface of Voya Nui.[1] Shortly afterwards, Kardas was challenged by another giant Rahi, the Tahtorak,[1][3] which had been unleashed by Brutaka's Kanohi Olmak earlier. The Tahtorak defeated Kardas, who fled to the island of Mata Nui.[4]

Upon arriving on the island, Kardas attempted to battle with the Bohrok swarms, but was severely wounded. Gali Nuva, while on a mission to awaken Mata Nui, found the injured Kardas Dragon unconscious and used her power to heal it.[5] When Kardas awoke, it entered the underground tunnels and reached the island of Metru Nui, where it encountered the Toa Mahri, who defeated and captured it.[6] It was then kept in the Archives.[7]

After the Great Spirit Robot was critically damaged in the Battle of Bara Magna, the Kardas Dragon was evacuated to Spherus Magna.[8]

The Kardas Dragon constantly generates a concussive force inside of himself and then releases it. If he does not release the energy, it would be forced out as an explosion that would kill the dragon. Like the spider it was transformed from, the Kardas Dragon is male.[9]

Although Kardas was fused to Vezon, he did not share the same kinetic absorption ability Vezon and Fenrakk did.[10]

The Kardas Dragon as a set 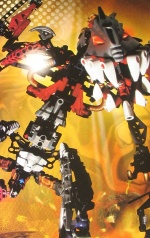 Promotional artwork of the Kardas Dragon

The Kardas Dragon is a set combiner of the Axonn, Brutaka, and Vezon & Fenrakk sets. However, the instructions needed to build Kardas were available in a special edition set that included the pieces of all three titan sets (though it did not come with instructions for the three component sets). The instructions were also available on BIONICLE.com. Kardas's wings could fold or unfold, and his mouth could open or close. At the time of its release, 'Vezon & Kardas' was the largest published BIONICLE model.