"He may seem slow and strange to you, but his simple words often carry a hidden wisdom."
— Turaga Vakama, Mata Nui Online Game

Kapura is an eccentric Ta-Matoran native to Metru Nui.

On Metru Nui, Kapura was a worker in Ta-Metru, working the vat controls and (during the Morbuzakh attacks) scouting out abandoned areas of Ta-Metru for any artifacts or pieces of work he could recover. One morning, he was visited by Nuhrii, who was looking for a Kanohi he had crafted that he had previously believed to be flawed and discarded. Believing the mask to most likely be in the Protodermis Reclamation Center, he sent the Ta-Matoran over there. Later that day, a four-legged creature broke into the control room and sabotaged the controls, leading the vats to stand still. After being saved by Toa Vakama from a Morbuzakh vine damaging the vats of molten protodermis, he informed the Toa of the sabotage and of Nuhrii's whereabouts.[3]

Kapura was captured by the Vahki under the command of Makuta Teridax, disguised as Turaga Dume. He was then forced into a Matoran Sphere but was later rescued by the Toa Metru and awakened on the shores of Naho Bay on the island of Mata Nui. 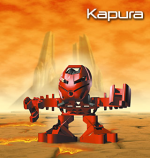 Kapura after being forced inside a Matoran Sphere

Kapura's strength and size were decreased by the time he spent in a Matoran Sphere and he also lost his memories of Metru Nui.[4] He took part in the construction of Ta-Koro, directed by Turaga Vakama and taking parts from the dismantled Airships used in the Great Rescue.[5]

As a member of the Ta-Koro Guard, Kapura was considered by some in Ta-Koro to be slow, but Vakama had great confidence in him and appointed him to stand at his left side. Through the Turaga's wisdom and much practice, Kapura learned the secret art of traveling very quickly by moving very slowly and concentrating on the place where he wanted to go. He was part of the Rahi hunting party which accidentally captured Toa Tahu, making him one of the first Matoran to know of the arrival of the Toa Mata.[6]

Kapura was also the first member of the Chronicler's Company. He traveled with Takua as he recruited members and to Kini-Nui, which they then defended against Rahi,[7] until Rahi began emerging in great numbers, threatening the Company's defeat before Military forces from the villages came to their aid.[8]

Kapura was the one who alerted the Toa Mata about the attack of the Bohrok swarms on Ta-Koro. They had found him lying on the ground in a state of shock, repeating the word 'Bohrok' over and over.[9][note 1] After the Bohrok Invasion he switched his Kanohi Pakari for a Ruru.

After the defeat of the Bohrok-Kal, Kapura, along with the other Matoran of Mata Nui, was rebuilt into a larger, stronger form, which bore a resemblance to his former form on Metru Nui.[10]

During the attacks of the Rahkshi, Kapura was evacuated from Ta-Koro, shortly before its destruction.[11] Later, after the defeat of Teridax by Takanuva, Kapura aided in the construction of Boats to return to Metru Nui.[12]

Following the arrival of the Matoran, Kapura participated in the mass effort to restore the city to its original state. He temporarily stopped his work of reconstruction on order of Jaller, to force the Turaga to reveal where the Toa Nuva had gone, but he eventually got back to work.[13] During this time, Kapura wandered into the Archives and promptly got lost. Takanuva narrowly arrived in time to save him from one of the exhibits.[14]

When Makuta Teridax took over the Matoran Universe, Kapura hid in the Archives along with Toa Nuva, Takanuva, the Turaga of Metru Nui and many other Matoran. He reported to the Toa that Metru Nui was replete with Rahkshi enforcing the will of Teridax.[15]

Returning to his hut after work, Kapura discovered a signal carved onto his hut, which told him to journey to a section of the Archives located near the outskirts of Ga-Metru. Once there, he met with Macku, and later Hafu. Together, they journeyed further into the Archives where they reached a Toa of Water. The Toa introduced herself as Tuyet and questioned the Matoran about the whereabouts of Lhikan and Nidhiki. After Kapura informed her that both Toa were dead, Hafu interrupted and questioned her usefulness. Tuyet grabbed a shard of the Nui Stone from her armor, and offered to ally herself with them.[14] As they traveled through the Archives they discovered Lewa, who was possessed by Tren Krom. Kapura did not realize that it was not the Toa of Air he knew, and willingly went with the group to the surface. Once above, Kapura caught sight of and explained to Lewa about the Toa Hagah's strange behavior. Tren Krom then silently freed the six Toa from Teridax's mental illusion and reassured the two Matoran that things may soon change for them.[16]

Kapura walked with Hafu and the two Toa into the chamber where Helryx was held. After some discussion about the arrival of Tuyet and Lewa's freeing Miserix from his illusion, Tren Krom announced that he had been inhabiting Lewa's body. Helryx then told the two Matoran to leave the chamber, and tell the others above to be ready for a resistance. Though Hafu attempted to argue, Kapura held him back, as he realized that she was going to destroy the Core Processor, ending the universe. The two Matoran however watched as Axonn and Brutaka appeared as well. Arguing about the fate of the Universe, two sides were drawn with Helryx, Miserix and Axonn wanting to destroy Teridax, and Brutaka, Tuyet and Tren Krom wanting to leave the Universe alive.[17] The battle ended with Artakha appearing and scolding the group,[18] and returning Lewa to his body. Soon after, Kapura was teleported by Teridax into the space above Aqua Magna along with everyone else in the chamber.[19]

As the group was drifting in space, Lewa created air bubbles around everyone's heads (other than Miserix) and they all linked hands. Artakha planned to create a portal to Teridax's destination, but the whole party were suddenly pulled through one created by Vezon. They appeared in a tower on Bota Magna, and encountered a Great Being who had been cursed by the Ignika. The Great Being's curse gave life to a wall, which grabbed hold of Kapura.[20] The Great Being then bid the assembled beings free him, and they began arguing over whether or not to do so.[21]

Outside, Velika rigged the fortress to explode and destroy everyone within.[22] Kapura, along with Hafu, later left the fortress before it was destroyed.[23] Unbeknownst to them, the cursed Great Being escaped as well.[24]

In this alternate universe where the Great Beings created Matoran-sized beings endowed with Toa-like abilities on Spherus Magna, Kapura was created as one such being, in order to deal with the impending disaster on Spherus Magna.[25]

In this alternate universe, Kapura lived in Metru Nui, under the tyrannical rule of Toa Tuyet. One day, when he was running, he encountered Takanuva who stopped him to ask some questions. Kopaka and Tahu came up to the two, and the former froze Kapura in ice from the neck down as punishment for dawdling.[26]

When Takanuva fulfilled his destiny in this alternate universe, he offered his Toa power to six Matoran, including Kapura, so that they became Toa.[27]

Kapura's slow and deliberate ways proved to set him apart from many Matoran, but they helped him to be insightful, purposeful, and careful. Kapura is rather physically slow, but Vakama told him to practice the art of getting to places quickly by moving slowly. Kapura would practice in the Charred Jungle outside of Ta-Koro, and after time became skilled in the art, saying that he simply has to focus upon where he is not, and soon enough he will find himself there.[6] The mechanisms behind and range of this power are unknown.[28]

Being a Ta-Matoran, Kapura has heat resistance.

On Metru Nui, Kapura wielded a Kanoka Launcher and wore a powerless red Pakari, the latter of which he kept after the Matoran migrated to Mata Nui. However, he took to wearing a powerless red Kanohi Ruru between the Bohrok Invasion and the Bohrok-Kal strike. As a member of the Ta-Koro Guard, Kapura would on scouting missions wield the two-pronged spear typical of the position. He also wielded Bamboo Disks as a member of the Chronicler's Company.

"But I know the Makuta is here now, in these burnt trees, and in the dead soil. All of these things were destroyed by the Makuta, but he never left them. That is how he becomes strong. That is what the Makuta does. He destroys things."
— Kapura, Mata Nui Online Game

"It is as Vakama said. I practiced and became skilled. I now know the secret art of traveling great distances by moving very slowly. It is only a small matter for me to be wherever I am not. It is a useful skill."
— Kapura, Mata Nui Online Game

"Courage is the soul of movement. You must have courage or you will be frozen. Fear stops all. Courage defeats Fear."
— Kapura, Mata Nui Online Game II: The Final Chronicle