"Round disks of protodermis used for both sport and defense in the city of Metru Nui."
— BIONICLE: Encyclopedia Updated

Kanoka Disks are tools imbued with powers that are used for protection, technology, and combat by many inhabitants of the Matoran Universe.

The technology to develop Kanoka disks was invented more than 7,000 years ago[2][3] in the Ko-Metru Knowledge Towers.[4][5] and was mass-produced in different locations.[3][6] Kanoka, named after the Matoran word for "disk,"[7] are made from purified Liquid Protodermis, and contain different powers depending on the properties and purity of the Protodermis that is used. Kanoka disks were forged in all areas of the city[1] and were available at central reserve areas or from various traders.[8] Kanoka disks were also made into Kanohi on Metru Nui by Ta-Matoran Mask Makers.[9]

Levitation and Increase Weight disks were used in Le-Metru airships,[10] and Speed disks in ground vehicles.[10] Kanoka Disks were also used in other parts of the Matoran Universe, including Stelt,[11] where they were fitted as weapons on certain Boats.[12] Ancient had Levitation Kanoka built into his boots.[6]

After the Great Cataclysm, the creation of Kanoka disks in Metru Nui stopped. Kanoka disk production resumed 1,000 years later, when the Matoran returned to Metru Nui. It was again halted after the Battle of Bara Magna forced a mass evacuation of the Matoran Universe.[citation needed]

Each Kanoka Disk is inscribed with three digits, which explain the disk's origins, power, and potency.

There are eight main Kanoka powers (besides the elemental powers).[14]

Kanoka disks can be combined to create disks with new powers, such as increase weight, levitation, speed, and flight. Not all powers in the Matoran Universe necessarily have corresponding disks.[30]

Kanoka disks wear out with repeated use. The Toa Metru brought some Kanoka with them to Mata Nui, but these disks became powerless over the years.[31] Later, the Matoran made replica disks out of Bamboo, but they were powerless and could only be used to strike things.[32]

Kanoka could be made in any Metru, and disks from different Metru had different abilities:

Kanoka Disks are created by pouring Liquid Protodermis into special molds. Frequently, this procedure is performed multiple times before the disk is pronounced complete. The nature and level of the disk's power is influenced by the qualities of the Protodermis utilized, its purity, and the proficiency of the Matoran forging the disk. Despite having a great deal of experience in smelting disks, Matoran still do not know how to guess the amount of power a disk will contain or what power it will possess.[15]

During the disk-making process, multiple Kanoka disks can be combined to form disks with new and different powers. Disks of the same power can be combined, but the resultant disk would not be a new power.[33][34][35] In some cases, Disk Makers can predict the result of the combination. On other occasions, the Matoran must experiment multiple times to produce the desired disk.[24]

Kanoka Disks were used in all sorts of games in Metru Nui, including Disk Surfing, Akilini, and Kanoka Toss.[36]

Despite the extreme scarcity of physical violence on Metru Nui, Matoran with serious disagreements were known to engage in disk dueling. Standing on opposite sides of an Akilini field, Matoran threw disks at each other, with the first one to strike the other winning. Unfortunately, depending on the disks used, these duels could have very serious repercussions: one Matoran was reduced to such a small size that he was never found, while another was transformed by a Reconstitute at Random disk into something so grotesque that he nearly ended up on exhibition as a Rahi in the Archives. In Metru Nui, disk dueling was highly illegal and guaranteed to bring prompt action from the Vahki.[36]

Kanohi can be melted back down into Kanoka. In the case of Noble and Great masks, the resulting disk will have a power level of 7 or 8, respectively. A powerless mask will result in a Kanoka with no power.[37]

Not all Kanohi can be forged from Kanoka, such as the Olisi.[38]

While only one Kanoka combination corresponds to a mask,[44] Kanoka produce the same mask regardless of the order in which they are combined.[45] This means, for example, a Strength Kanoka can be made from Enlarge, Regeneration, and Remove Poison or alternatively Shielding and Remove Poison.

The following Kanohi can be forged from Kanoka available in Metru Nui.

Additionally, masks with the powers of Remove Poison, Freeze, Reconstitute at Random, or Increase Weight could be forged from those respective disks. It is unknown if any were ever made.[49][50] 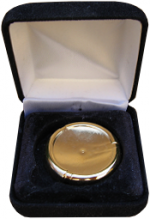 Kanoka made their first appearance with the 2004 sets, using an updated version of the mold produced years earlier for the Bamboo Disks of the Matoran of Mata Nui and the Slizer line before that. Every disk had an exclusive code on it that could be entered into the Kanoka Club website for points, used to buy rewards such as videos, animations, images, and games. However, the rare Disk of Time code featuring 199, which could be gained through the Exclusive Vahki Sets or Ultimate Creatures Accessory Sets, could not be used at the Kanoka Club as they rendered that combination an invalid code. The 2004 Toa Metru Vakama set came with Vakama's Toa Disk decorated with a Huna, the only Toa Metru to have such a disk released. A Kanoka Disk Launcher Pack came with two of fifty-one random Kanoka disks, eight from each of the Metru and three other disks.

The Disk of Time was primarily packaged with Target store-exclusive Vahki sets in 2004. It also released with the combined comics of Seeds of Doom and Enemies of Metru Nui in October, 2004. Prototype Disks of Time also exist; these Kanoka simply do not have the code printed on the disk. They were given to employees of LEGO.

A Golden Kanoka was used as a first prize for the 2004 BIONICLE Instant Win Game and speed build competitions at LEGO stores, March 22 through 28 in 2004. In September 2004, at the UK Fox Kids and UK Scholastic websites, three virtual Kanoka disks could be found around the site. Once found, an entry form for a contest could be unlocked. The contest featured several prizes, such as golden Kanoka disks. Finally, in November, 2004 in the United Kingdom, the LEGO UK magazine had a contest that gave one the chance to win one of ten gold Kanoka disks.

During the 2004 Comic-Con convention, an exclusive Kanoka disk was supposed to be produced and placed within five thousand Toa Metru Vakama sets, which the convention attendees could buy. However, due to a production error, the disks were never featured and only a few samples were made for publicity. The Kanoka had the Comic-Con logo printed on the front of it.

In Europe, a promotional Ta-Metru Kanoka featuring the code 175 was gifted with the combined comics of Rise of the Rahkshi!, At Last -- Takanuva! and Secrets and Shadows.

Employees of LEGO also received a special Kanoka disk called the "BIONICLE Kanoka" with the symbol of the Three Virtues printed on it.

Kanoka were released in the following sets: