"You told me you were going to quit the team after we raided the brotherhood's fortress, remember?"
"And I will -- as soon as the others are safe."
— Toa Hagah Norik and Iruini, Birth of the Rahaga

Iruini is the Toa Hagah of Air previously assigned to Makuta Teridax and one of the six former Rahaga.

Iruini was an active Toa for a lengthy period of time, operating as a member of another Toa team. When the Brotherhood of Makuta decided that Makuta Teridax needed Toa bodyguards, Iruini was selected as representative Toa of Air. He was endowed with metallic armor to indicate his status as an elite Toa and his former teammates presented him with his current Kanohi Kualsi as a badge of honor.[1][2] 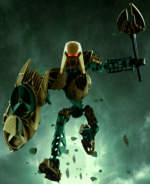 Iruini's new Toa team performed this task well and protected Teridax from dangers such as Rahi intrusions. During one mission with Norik, they encountered a number of Frostelus, although bested the creatures by combining their spear powers to make a lava cyclone.[C25]

They later found out that the Brotherhood was harming the Matoran they had sworn to protect. The Toa Hagah raided the Destral Fortress and stole the Kanohi Avohkii. After this success, Iruini eventually quit the team, believing they wasted time on large threats and not enough time on ever-present dangers. The group's victory caused them to be overconfident, especially their leader, Norik. Because of this, four of the Toa Hagah were ambushed by Roodaka and mutated into Rahaga.[3] In order to save his friends, Iruini temporarily allied himself with Norik, managing to defeat an army of Exo-Toa, Visorak, Dark Hunters, and even Makuta Teridax himself. The rescue of their friends came at a great price, however, as Iruini and Norik were also mutated into Rahaga in the process by Roodaka's mutation Rhotuka.[C25]

Iruini was ashamed of his transformation into a Rahaga, but eventually numbed to his appearance. Iruini and his comrades followed the Visorak horde to help their Rahi victims. Unlike the other Rahaga, Iruini did not believe in Keetongu, and put no faith in curing victims of Hordika Venom this way.[C23]

Iruini and the other Rahaga came to Metru Nui in an attempt to stop the Visorak there. The Rahaga remained hidden in the Archives and witnessed the defeat of Teridax by the Toa Metru, the departure of the young Toa to find a safe refuge for the Matoran, and the arrival of the Visorak in Metru Nui.[3] 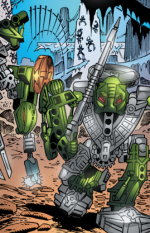 When the Toa Metru were captured by the horde, mutated into the Toa Hordika, and dropped to fall to their deaths, the six Rahaga rescued the Toa and taught them about their new abilities and the consequences of the venom. Despite the warning that if not cured soon, the mutation would be permanent, the Toa chose to save the Matoran before themselves.[4] Iruini helped Matau scavenge for Airship pieces and revealed to him that the Rahaga had once been Toa and his disbelief in the existence of Keetongu.[C23] While they were searching in the Moto-Hub, Matau was deceived by an Oohnorak and let the Visorak overwhelm them. They were rescued by the other Toa Hordika and joined a battle against the Visorak and the Zivon. The Rahaga and Toa won the day and claimed a command tower for themselves.[5] Though he still did not believe in Keetongu, Iruini assisted in the translation of ancient texts referring to Keetongu in the Great Temple. That night, Iruini and all the other Rahaga but Norik were captured by Vakama, who had joined Roodaka. The Rahaga were taken to Sidorak and hung from a pole on the Coliseum. They were freed by Norik during the Battle of Metru Nui and proceeded to aid the Toa. Iruini witnessed Keetongu join the battle and heal the Toa Hordika of their mutation.[6]

Rahaga Iruini in Web of Shadows

After the Toa Metru left for Mata Nui with the Matoran Spheres, Iruini assisted the other Rahaga and Turaga Dume in rebuilding the great city. Approximately 500 years ago, the Rahaga, Keetongu and Turaga Dume fought off a band of Visorak which attempted to attack the city.[TDR] Iruini departed with the other Rahaga and Keetongu to help other islands that fell to the Visorak, but they still used Metru Nui as their base. They were present to welcome the Matoran back to Metru Nui after a millennium away from the city.[citation needed]

The Rahaga traveled to aid the land of Xia, which was being ravaged by the battle of the Kanohi Dragon and Tahtorak. They arrived to find Roodaka in the custody of the Toa Nuva, and Roodaka transformed them back into Toa Hagah.[TNB, Ch. 6]

Iruini was annoyed Gaaki's vague prediction of a coming threat, but climbed a spire and saw hundreds of boats approaching. Iruini ignored Norik's warning and teleported to one of the ships, where he faced the the Shadowed One, surrounded by Dark Hunters, who revealed he was there to destroy Xia.[DID, Ch. 1] Iruini was saved by the timely arrival of Toa Helryx, who threatened the entire armada with a massive tidal wave. She had the other Toa Hagah teleported to the ship, and, after ensuring the Shadowed One would not destroy Xia, introduced herself to the Toa as the leader of the Order of Mata Nui. She informed them they had been recruited into their war against the Brotherhood, against their protestations, and assigned them to track down Teridax, with Zaktan as their guide. The Toa Hagah reluctantly agreed, even as Gaaki prophesied that one of their party would not return from the journey.[DID, Ch. 2]

The Toa Hagah were then teleported to Metru Nui, where Norik informed the Toa Mahri that they had to destroy the Coliseum.[DW, Ch. 3] The Toa Mahri fought the Toa Hagah, and Iruini was attacked by Hewkii, though his skills proved superior. The fight ended when Kualus lost control of a giant Rahi, and and Iruini combined his powers with Norik, Kongu, and Jaller to stop the beast. The Toa Hagah explained the reason for their mission, and the two Toa teams united to raise the Coliseum so the Toa Hagah could descend. Iruini and Kongu watched Zaktan while the other Toa made a tunnel under the Coliseum. He then descended into the tunnel with the other Toa Hagah and Zaktan.[DID, Ch. 3]

As they proceeded, the Toa Hagah came across a inscription on the wall in a foreign dialect. A trap magnetically attached the Toa Hagah to the walls, while molten Protodermis surged down to destroy them.[DID, Ch. 5] They were saved by Makuta Miserix, who teleported them into a separate tunnel. Miserix and the Toa Hagah reached a tentative alliance to find Teridax, and followed the tunnels until they reached the Core Processor, where they found two organic corpses.[DID, Ch. 7] Helryx, Keetongu, Brutaka, and Axonn then emerged from a portal. Teridax interrupted their conversation and shattered Zaktan's tank, seemingly killing him, and Brutaka's Olmak.[DID, Ch. 8] After imprisoning Miserix, Teridax placed Iruini and the other Toa Hagah in an illusion in which they had defeated him. Iruini and his team then returned to Metru Nui.[DID, Ch. 9]

Emerging from the underground, Iruini and the other Toa Hagah took to patrolling the city, convinced that everything was fine within the universe.[RoS, Ch. 3] Tren Krom later freed them from this illusion.[RoS, Ch. 7] Iruini later joined the resistance along with his fellow Toa Hagah.[7]

Gaaki gathered Iruini and the other Toa Hagah to help the Toa Mahri, who were under the influence of a strange creature and serving the Skakdi.[TPTB, Ch. 1]

As a Toa of Air, Iruini can create, control, and absorb air. This also gives him the ability to control air pressure, create twisters, and summon wind storms. These abilities were lost when he was turned into a Rahaga, but he has since regained his powers.

As a Toa Hagah, Iruini believed that the team needed to spend more time on smaller dangers, such as Rahi invasions. The rest of the team did not share this view, and the differences of opinion lead to him quitting the team.[citation needed: BA9?] His concern for his allies caused him to join forces with Norik again to save them.[C25]

Upon becoming a Rahaga, Iruini quickly resigned himself to the mutation, and did not accept that Keetongu had the power to cure him.[C23] However, he was overjoyed to become a Toa again, adopting an adventurous attitude.[DID, Ch. 1]

Iruini's Rhotuka manifests itself as a healing factor, spinners that can heal physical wounds through touch. The Rhotuka can heal diseases and insanity if they are caused by physical ailments, but cannot undo mutations. Iruini cannot use this Rhotuka to heal himself.[8]

While a Rahaga, Iruini's snag spinner could tangle the legs of creatures, cutting off their escape. He focused on rescuing climber Rahi, including the Cable Crawlers.[9]

Toa Hagah Iruini carries the Cyclone Spear and a Rhotuka Launching Shield, which can launch healing spinners. He wears the Kanohi Kualsi, the Great Mask of Quick-Travel.

As a Rahaga, Iruini possessed a mounted Rhotuka Launcher and carried a Rahaga Staff which could be used to hypnotize Rahi.[10]

4879 Rahaga Iruini was first released as a small set in 2005. He came packaged with a gold Rhotuka spinner printed with a Kanoka Club code. The prefix for the code was on the back of the box. He could be combined with Norik and Bomonga into a Colony Drone.

8762 Toa Iruini was then released in the summer as a special edition Toa Hagah canister set, made for the 50th Anniversary of the LEGO System. The set contained fifty-two pieces in all. The set was available individual worldwide, but can also be found in a special combo pack with Toa Norik. Toa Iruini was packaged with a gold Rhotuka like his Rahaga form as well as a dark green Rhotuka spinner. The gold Rhotuka again contained his Kanoka Club code. Spinning a gear on his back made him swing his right arm. Toa Iruini could be found packaged with Sidorak.

Toa Iruini started out as a set design for Nidhiki as a Toa.[OGD]

"Look out! Dumb stuff, coming through!"
— Toa Hagah Iruini to Norik, Comic 25: Birth of the Rahaga

"We're Toa. We dare a lot of things."
— Toa Hagah Iruini to Roodaka, Comic 25: Birth of the Rahaga

"Keetongu is a myth, Matau. Some of the other Rahaga believe in him, but I don't. A Rahi as big as that existing for so long without being found? Please."
— Rahaga Iruini to Toa Hordika Matau, Challenge of the Hordika

"Roodaka did this. She did it, and she laughed. The others may be here to save Rahi from the Visorak or search for some creature from an old Matoran tale. Me? I'm here to make sure Roodaka never laughs again."
— Rahaga Iruini to Toa Hordika Matau, Challenge of the Hordika

"Wait for what? I spent thousands of years as a Rahaga — now I'm back in action, and I love it!"
— Toa Hagah Iruini, Dwellers In Darkness