"It is known all over Bara Magna for its large deposits of exsidian, a metal which is valued for its endurance."
— Metus, Glatorian Arena 2

Iconox was the village of the Ice Tribe on Bara Magna.

Iconox was the first of the villages to form after the Shattering, after the Ice Agori moved south to avoid the Core War, and became stranded there. Strakk, who was nearby at the time, took refuge in the new village. During the subsequent 100,000 years, Iconox thrived thanks to its Exsidian deposits. Iconox used the valuable metal for trade and as payment for Glatorian matches. Metus served as a great Exsidian salesman, although the other villages became so desperate for the metal that war seemed imminent. However, a new social system developed by Certavus and other Core War veterans helped to avert war for the next 100,000 years.

Certavus served as Iconox's prime Glatorian until his death, at which point he was replaced by Strakk.

Some time later, Iconox lost a shipment of Exsidian to Vulcanus during an arena match. To avoid Bone Hunter activity, Iconox charged Metus with finding a new route. When the Exsidian did not arrive in Vulcanus, its absence threatened the Glatorian system and the possibility of war.

After the Battle of Roxtus, the Agori decided to not include Iconox in the construction of the Mega-Village, and it remains in good condition. 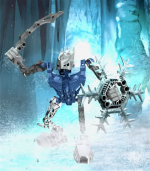 Iconox is the westernmost village on Bara Magna, and is situated in the White Quartz Mountain range, meaning it is much colder here then in any other place on Bara Magna. The village contains large deposits of Exsidian. Much like other villages, Iconox is organized as a single structure containing all Ice Tribe dwellings and workplaces. The shelters here are made of slabs of crystal fitted together and supported by crystal pillars.

Before the tribes united, the Arena Iconox was used for Glatorian matches in order to settle disputes over resources.

The Agori of the tribe are very social, being very adept at trading with villagers, as well as advertising their matches. They are also very talented miners.