100,000 years ago, Icarax was created from the substance known as Antidermis from a pool in one of the Southern Islands of the Matoran Universe by the Great Spirit Mata Nui.[2][3] Like the other members of his species, he became a member of the Brotherhood of Makuta, an organization devoted to carrying out the will of Mata Nui and maintaining order in the universe. Icarax was responsible for creating numerous breeds of Rahi to populate the universe.[2]

Shortly after the completion of the fortress of Destral, Icarax and his assistant Pridak were sent to Xia, along with Mutran, to make the Vortixx charge lower prices for their goods. While there, after some days of negotiation, Icarax lost his temper and destroyed several buildings. As a result, the Vortixx quickly agreed to lower their prices for the Matoran cities to which they shipped their goods.[4]

Icarax was also present during a meeting with the League of Six Kingdoms shortly after the League's formation.[5]

After the Matoran Civil War on Metru Nui, Icarax was assigned by Miserix to watch over the island of Karzahni.[6]

Icarax, like the other Makuta, evolved beyond the need of a physical body, turning to a simpler form of Antidermis within armor. The Nynrah Ghosts, ordered by Teridax to Destral, helped modify his armor to accommodate for the new virus-like form.[8]

After the Great Cataclysm and the Metru Nui Matoran's evacuation of the city, Icarax lost faith in Teridax's leadership and chose to conquer the Matoran Universe through might. He composed a small army of Manas and attacked the Northern Continent, managing to take down several of the villages on it. However, Teridax then confronted Icarax as punishment for defying him. Teridax allowed Icarax to fight him for hours until he became exhausted, and then turned on Icarax by taking control of his Manas and using his every ability to defeat Icarax. However, Teridax permitted him to live, for he still had a use for Icarax's talents and found Icarax's war-like characteristics amusing.[6]

While Teridax was on Voya Nui, he telepathically communicated with Icarax and told him to retrieve the Kanohi Kraahkan from the Silver Sea. Icarax retrieved it, narrowly avoiding a confrontation with Takanuva,[9] and took to wearing it.

When the entrance to Karda Nui was discovered by Vultraz, the news was relayed to Teridax, who ordered the Makuta to go to the universe core and seize it. Icarax, however, believed his orders were almost insane and refused to go, despite Antroz's efforts at convincing him to do so.[10]

Icarax originally wore the Great Mask of Scavenging.[11] Upon recovering Teridax's Kraahkan, Icarax took to wearing it as his own mask, waiting until Teridax returned to claim it.

During his time in Karda Nui, he equipped himself with a Tridax Pod, his Rotating Shadow Blades, and a Twin Sword. 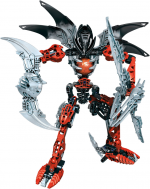 "I have fought tougher Toa than you before. And as I stepped over their bodies, I will step over yours."
— Icarax, BIONICLE.com