"Built on a spit of land so that it stands apart from the rest of the metru, the Great Temple is a haven for those who are troubled and a symbol of hope for all citizens."
— Metru Nui - City of Legends

The Great Temple, also known as the Temple of the Great Spirit, was located off the coast of Ga-Metru and was the spiritual center of Metru Nui.

The burnt down temple

The gate leading to the Great Temple

The Great Temple was constructed early in Metru Nui's history. It is here that Kanohi masks are stored for safekeeping, and it is also home to a Protodermis purification facility. The original Great Temple was destroyed by Protocairns, but was then rebuilt on a strip of land they formed after dying.

At the heart of the temple is the Toa Suva, which is where Matoran were transformed into Toa with the help of Toa Stones. The scriptures in the Great Temple were ancient, but told secrets like the location of Keetongu and the Great Disks. Prior to the Great Cataclysm, the Great Temple was a popular tourist destination for Matoran, although the Toa Suva was off-limits at one point due to Toa Lhikan's 'theft' of the Toa stones inside, which he took soon before the Great Cataclysm. While doing so he was ambushed by the Dark Hunters Nidhiki and Krekka and briefly fought them outside the temple.

The six Matoran who had been given the Toa Stones by Lhikan, Nokama, Vakama, Matau, Onewa, Whenua, and Nuju, all traveled to the Great Temple as requested. After some discussion between each other, they placed the stones in the Suva which immediately transformed them into Toa. They then received a message from Toa Lhikan, informing them of their mission and they chose their Toa Tools from a tool storage in the Suva. The newly-transformed Toa left shortly after to find the Great Disks which Vakama had a vision of. When they had all located one of the Matoran knowing the location of a Great Disk, they returned to the Temple and discussed together, before they left to find the Great Disks. Later, Nokama and Matau discovered a Great Disk in the water underneath the Temple and retrieved it from the Dweller in the Deep. After finding the Great Disks, the six Toa and six Matoran gathered at the Great Temple and, after conversing more about the recent events, left to defeat the King Root of the Morbuzakh.

The temple survived the Great Cataclysm relatively intact. During the Great Rescue, Nokama and the Rahaga, Gaaki, had traveled to the Great Temple in search of Kanohi. While the two mutated Toa battled against a Gate Guardian protecting the closed vault, Krahka uncovered a prophecy concerning the true Matoran destined to be the Toa Metru. After defeating their foe, Nokama found the disheartening evidence that Krahka had left behind.

Some time later, the temple was heavily damaged in a fire started by Toa Hordika Vakama while he was working for Roodaka and kidnapped five of the Rahaga. At the time, the Rahaga had come to the temple to decipher inscriptions relating to Keetongu, while the other five Toa Hordika stood outside. The next morning, the five Toa entered the temple and found Norik under the rubble. They dug him out and he informed them of what had happened, before they embarked on their quest to find Keetongu.

After the Visorak horde's withdrawal from Metru Nui the Great Temple underwent further damage when Teridax teleported the Shadowed One's disintegrator eyebeams from the path of their previous target, Toa Vakama, during their battle. When the Matoran returned to Metru Nui, the Ga-Matoran managed to rebuild the Great Temple.

The Toa Nuva used their Kakama Nuva to sneak into the temple to retrieve a scroll with a list of tasks for them to do before the awakening of Mata Nui.

The Great Temple as seen from the air 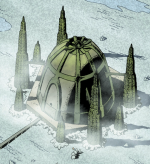 The Great Temple in the comics