The Glatorian were originally the warriors of Spherus Magna. A group of Glatorian,[1] named the Great Beings by the Agori, once ruled the planet, and in order to help them govern the inhabitants of the planet, six other Glatorian were chosen by them to lead the Fire Tribe. Water Tribe, Jungle Tribe, Ice Tribe, Sand Tribe, and Earth Tribe. They were granted Elemental Powers and transformed into the Element Lords.[2]

The Element Lords eventually declared war on one another, seeking to gain control over a mysterious silver liquid that had appeared on the planet. The fighters were conscripted into armies, and began acting as soldiers.[3] The Great Beings chose two warriors as pilots and placed them in the Matoran Universe, within its Core Processor.[4][5] During the war, the Shattering struck the planet, splintering it into several pieces. A large number of the warriors were on Bara Magna when it occurred, and were trapped there as a result.[3]

To cope with the drastic change, the Glatorian System, based on arena matches, was developed to avoid another global war. Though many of the warriors were initially opposed to the new system, veterans Certavus, Tarix, Vastus and Ackar advocated for the peace that it would bring, and eventually convinced everyone that it was for the best. The new system changed their duties, and they began to be hired by the tribes for different tasks. Primarily, Glatorian were sent to fight each other whenever there was a dispute over resources, though they would also be hired to protect a village, guard trade caravans, and search for resources. Glatorian began fighting in arenas in order to promote the system, avoiding major scale wars. Though they were not restricted as to what tribe they could fight for, most Glatorian stayed with the tribe they fought for and rarely changed sides. Several members of the species chose not to be warriors, and retreated to the wastelands, unable to gain food or shelter from the villages.

A yearly competition known as the Great Tournament was eventually set up, in order for the Glatorian to prove their abilities to the entire planet. The victor was given the right to claim more resources, as well as the right to demand higher pay for their services.[6]

The Skrall, a related species of warriors, joined the system as Glatorian after they relocated to Roxtus, under the direction of their leader, Tuma. The Skrall quickly earned a reputation as nasty fighters, and they were undefeated in arena matches.[7]

During the latest Great Tournament, the Arena Magna was attacked by the Skrall. The Glatorian fought back, but were overwhelmed by the ferocious army. Many Glatorian were killed in the conflict, and the survivors fled the arena. Several of them reunited, and began to plan a counter strike against the Skrall.[8]

Despite the Skrall abandoning the Glatorian system, Arena Matches continued to occur. Ackar, Prime Glatorian of the Fire Tribe, eventually discovered that the Skrall had allied with the Bone Hunters, and traveled to Tesara with Gresh, Kiina, and the newcomer Mata Nui, in order to inform the Agori and Glatorian what had happened. When the residents of Bara Magna had learned of what had occurred, they agreed with Ackar's plan to unite the villages. The Glatorian traveled to Roxtus, where they battled the Skrall, ultimately defeating the Rock Tribe. The warriors retained the title of "Glatorian" and began serving the united village as a defense force. Ackar was named as leader of the force by Mata Nui.[9]

Several Glatorian began accompanying Mata Nui on his quest to the Valley of the Maze, but later returned. The newly formed defense force was soon called upon to defend their city, and battled the Agori slaver Sahmad, defeating him.[10]

Eventually, the Golden Armor was used to destroy the Rahkshi and a fragment of Aqua Magna hit Teridax, killing him. Most Skakdi and Skrall fled or surrendered, and those who did not were defeated. The Toa and Matoran came to live with the Agori and Glatorian on the newly restored Spherus Magna.[11]

After their planet was healed in this reality, the Glatorian lived with the Matoran Universe inhabitants, and were aided by the Toa in doing daily tasks.[12]

Each Glatorian has varying physical strength, tactics, weaponry and personal physical capabilities. A Glatorian's body is made up of largely organic tissues, but also contains varying amounts of permanent mechanical implants, such as implants that increase muscle endurance or agility. All Glatorian have a metallic bone structure.[13]

Glatorian are mammalian[14] and are capable of biological reproduction.[15]

During the Core War, the Glatorian served as soldiers, pitting their strengths and talents against the other tribes, on the orders of the Element Lords. After the Shattering, those stranded on Bara Magna became gladiators for their tribes, fighting to acquire resources. Some also served in other capacities, such as bodyguards. Due to the nature of their profession, all Glatorian were taught combat skills at the start of adolescence.[29] Attitude toward the job varied by Glatorian; while most felt it was merely a profession, others took to the nobler aspects of it, and some disdained it entirely. 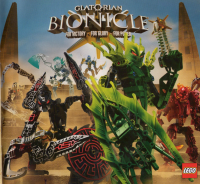