"Armor... but more than armor... power greater than we have ever known..."
— Toa Mata Lewa, Into the Nest

The Exo-Toa are suits of armor created on order of the Brotherhood of Makuta by the Nynrah Ghosts.

Exo-Toa among the Brotherhood of Makuta's legions

The Exo-Toa were designed by the Nynrah Ghosts for the Brotherhood of Makuta, and manufactured by the Vortixx on the island of Xia. The Brotherhood used them for two purposes: to guard against a premature release of the Bohrok, and to guard the fortresses of the Brotherhood.

An Exo-Toa was used as a test subject by Chirox to test the Makuta's ability to possess robots after discovering their evolution and to play a joke on Mutran. This suit was broken by Mutran.

Several Exo-Toa were used in the raid on Artakha by Makuta Kojol. The island's inhabitants were defenseless against them, and Kojol was able to invade the island and take the Kanohi Avohkii from Artakha's fortress. Those particular Exo-Toa were destroyed by the Order of Mata Nui soon afterward along with Kojol and the Visorak and Rahkshi who took part in the raid as part of the purge of all who knew of the island's location.

When the Brotherhood began to plot against Mata Nui, they used the remaining Exo-Toa and Fohrok along with the Visorak swarms in an attempt to conquer the Matoran universe.

During their Raid on the Destral Fortress, Norik and Iruini encountered and destroyed many Exo-Toa acting as sentries for the Brotherhood of Makuta's fortress at Destral. After the Hagah defeated Teridax and were mutated, the Brotherhood had more made by the Vortixx.

When the Great Cataclysm struck rubble from Destral's fortress crushed the Makuta of Stelt's armor. The Makuta's energy was placed inside of an Exo-Toa until the armor could be repaired.

The Toa Mata encountered six of these machines deep in the caverns of Mata Nui during the attack of the Bohrok swarms. They placed the forty-eight Krana that they had gathered in the slots in the floor of a circular room in the nest, which activated the doors around the room's walls. The Toa entered to discover the Exo-Toa, which they then used in an attempt to defeat the two Bahrag. Tahu fired an Electro-Rocket at the Bahrag, but it was stopped by the Bahrag's barrier. Tahu realized that the Exo-Toa hindered their Elemental Powers and the Toa shed their armored suits.

The Bohrok-Kal discover the Exo-Toa guarding the Nuva Cube.

When the Toa Nuva later went back to stop the Bohrok-Kal from freeing the Bahrag from their Toa Seal, they found the Exo-Toa on autopilot, fighting the Bohrok-Kal, although they met with failure. The six elite Bohrok destroyed the Exo-Toa. When the powers of the Bohrok-Kal were overloaded, destroying their users, the parts of the broken Exo-Toa were magnetized to Gahlok-Kal, crushing it.

After Turaga Vakama told the Toa Nuva about the city of Metru Nui, the Onu-Matoran inventor Nuparu secretly salvaged pieces of the Exo-Toa and brought these pieces to Metru Nui. He planned to study them, but was unable to do this because events forced him to leave Metru Nui before he got a chance.

Exo-Toa were utilized by the Brotherhood of Makuta alongside Rahkshi to defend against the Order of Mata Nui's surprise attacks on their strongholds during the Order of Mata Nui/Brotherhood of Makuta War. After Teridax's takeover of the universe, he used Exo-Toa to round up inhabitants and send them to Metru Nui for work. A group of twelve Exo-Toa found Tahu, Johmak, Lariska, Kopeke and Krahka in Karzahni and, due to Teridax speaking through them, ordered them to go to Metru Nui on threat of death. However, the team was able to escape being captured by the Exo-Toa thanks to the surprise arrival of Onua, who created a seemingly bottomless chasm beneath them using his Earth powers. 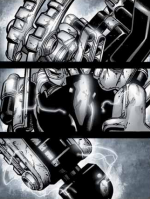 From top to bottom: The boxing claw, the chestplate, and the Electro-Rocket

The Exo-Toa have two weapons: a boxing claw on one arm that can extend and deal a powerful blow and an Electro-Rocket on the other hand, which has great power. The Exo-Toa also possess an autopilot mode and artificial intelligence, enabling them to react to certain situations. They have various senses and are able to locate targets using heat sensors. They are not, however, programmed for complex things, such as Matoran speech. After Makuta Teridax's takeover of the Matoran Universe, the Exo-Toa acted according to his will, and he has even spoken through them at least once.

As armor, the Exo-Toa greatly enhanced the physical endurance and strength of the wearer, to the point that Pohatu was able to tear up and throw a stone approximately ten times his size without the aid of his elemental powers. However, the armor also severely restricted the use of a Toa's elemental powers, although they could still use their Kanohi. 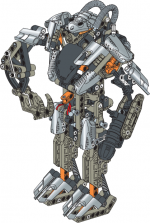 An Exo-Toa as a set

The Exo-Toa was released as a set in summer of 2002, containing 360 pieces. Squeezing its right arm made that arm's claw shoot forward, while its left arm was fitted with a blunt shooter. A gear on its back retracted the robotic head so a Toa Mata could enter through the front, which opened with a small lever. The Exo-Toa set was designed specifically to be donned by Toa Tahu's set forms, both Toa Mata and original Toa Nuva incarnations; as a result the Gali, Lewa, and Kopaka sets could also combine without problems (Pohatu and Onua could combine with minor adjustments made). The Exo-Toa set also included instructions for an alternate model of a robotic steed.

"All of you! -- Shed your armor! It hinders our elemental powers -- and they are our only hope!"
— Toa Mata Tahu, The End of the Toa?

"Although empty, these suits of armor still oppose us... But they will fall before the power of sound!"
— Kohrak-Kal, A Matter of Time...