Energized Protodermis is a sapient substance which originated from the planet Spherus Magna.

In the Matoran Universe, the substance eventually began to experiment on things around it, and offered its powers to those who it believed had intriguing intentions. It worked with the Makuta on their experiments, and to create Rahkshi, as it was interested in their work. Teridax constructed a pool of Energized Protodermis in his lair, and it often communicated with Teridax in one of his lairs to assist him with his experiments with various Rahi.

Instead of allowing the Toa to take some of itself, the substance demonstrated its power by mutating a tiny insect into a 200-foot monster. It then watched as the Toa defended themselves against the beast, and when it tired of the fight it destroyed the insect. This led the Toa to attack the substance, which had made itself a physical form, and in response it began mutating a number of creatures into fierce monsters.

After the Toa defeated the creatures, they began taunting and angering the substance, eventually luring it into destroying the support pillars holding up the chamber. The Toa then attacked from all sides. Desperate to protect the pool, the substance was at a loss as to where to direct its attacks, since attacking one Toa would leave the pool open to damage from the others. With only one pillar remaining, the Toa halted and offered to leave the lair standing if they were allowed to take the Protodermis they came for and leave safely. The substance reluctantly agreed to let them take what they needed, but tried to attack them with a tidal wave of itself after they had collected the substance. The Toa quickly shattered the last pillar and collapsed the chamber, destroying the pool and escaping.

The Toa Mata are transformed in tubes of Energized Protodermis.

After a fight with the Bahrag, the Toa Mata descended into tubes filled with Energized Protodermis and were transformed into the Toa Nuva: more powerful versions of themselves with enhanced weapons, masks, armor and powers.

During the battle between Takanuva and Makuta Teridax, both beings fell into the pool of Energized Protodermis in Mangaia, which fused them into one entity, Takutanuva.

Later, Helryx and Keetongu arrived on an island to investigate the origins of several Rahkshi. They found the substance forming its physical form in the center of a giant lake of Energized Protodermis, and Helryx questioned the substance of its purpose and the destruction it had brought. When Helryx threatened that the Entity would be destroyed, the Entity replied by rousing a tidal wave of Energized Protodermis and rushing it towards the two beings. They escaped through a portal created by Vezon as the latter took their place. Vezon was then washed with Energized Protodermis, causing the Kanohi Olmak he was wearing to be absorbed into his body, and granting him the ability to create dimensional gates.

On Zakaz, a rebellious legion of Skakdi created a new lifeform with Energized Protodermis by fusing a captured Vortixx, a Zyglak, a being from the workers of Stelt, the five mutated Piraka, and a strange green cloud.

Energized Protodermis will transform or destroy almost any substance or creature it comes into contact with. The Great Beings were able to develop a material that is resistant to the effects of the liquid, which they used in certain parts of the Matoran Universe to contain it. Whether or not something changes and what it changes into depends on its destiny; objects or creatures that are destined will be transformed, while those that are not destined will be destroyed. Beings and objects with the destiny to do so can transform multiple times. The transformations it causes are random; for example the Toa Nuva were given new powers and slightly different bodies, armor, and tools, without actually changing what they were while the Protocairns were completely transformed, turned into something radically different from the Matoran they were before. Energized Protodermis is also explosive, something Vakama took advantage of to knock out Sentrakh during the Battle for the Kanohi Vahi.

The substance has the ability to form itself into a physical form of any shape it chooses, and is capable of thinking and speaking through the form. It can channel itself through jets or into a tidal wave. It seems that it also has the limited ability to sense whether or not a being is destined to be transformed by Energized Protodermis, but not exactly how it will transform. The substance also has a very enigmatic personality. It allowed the Makuta use its pools as it saw their projects interesting enough to warrant his attention. It is willing to assist those who wish to use Energized Protodermis if it deems their intentions worthy of its focus.

The Order of Mata Nui found a counter-agent able to destroy Energized Protodermis. 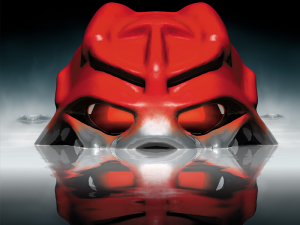 A group of Matoran exposed themselves to Energized Protodermis and were transformed into Protocairns, beasts that destroy everything they come across.

"Some villagers discovered a silvery liquid leaking out of a fissure and went to see what it was. They touched it and - poof! – no more villagers. Later on, someone else tried to scoop a little up and their tool turned into a trident. Weird."
— Alternate Macku, Brothers In Arms

"I have met your kind before. So confident in your power to contain me, control me, or destroy me. You are no more than Stone Apes reaching for the stars, believing you could extinguish them if only you could get them in your grasp. Transformation, or destruction. Which will be your fate? Let us find out, together."
— Energized Protodermis, Destiny War