"Right, I'm sure where you came from, Ga-Matoran are all gentle peacemakers who never raise their voices. That's what they ... we ... were like where I came from too. But I have news for you, sister — this isn’t Metru Nui. We don’t have time to be polite. It's fight, or end up like them."
— Dalu to Toa Inika Hahli, Power Play

Dalu is a Ga-Matoran warrior, and was the enforcer for the Voya Nui Resistance Team.

At one point, Dalu received some sort of injury and was sent to Karzahni to be repaired. She was rebuilt, but in a new, weakened form. To compensate for this, she received a pair of Chargers. She was later sent to the Southern Continent to spend the rest of her life, as Karzahni was ashamed to admit his failure at repairing Matoran and preferred to send them away.

During the Great Cataclysm, a portion of the continent broke off and surfaced on Aqua Magna, into what became Voya Nui. This caused Dalu and many other Matoran to continue on in a hard new life, which was difficult due to the scarce resources, on Aqua Magna. 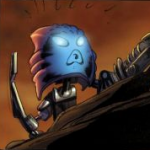 When the Piraka arrived on Voya Nui, pretending to be Toa to the Matoran, Dalu tried to consult with Vezok about her anger. To her shock, Vezok suggested that she kill the Turaga and take over the Matoran. When Dalu informed Vezok of the fact that their Turaga, Jovan, had died, Vezok replied stating that he liked them dead due to an argument earlier in his life.

Shortly after, Dalu, along with five other Matoran, sensed that something was incredibly wrong with the Toa. They found the Piraka ordering the Matoran to do terrible jobs such as constructing a fortress which no Matoran would ever use and draining lava from Mount Valmai. Their suspicion was confirmed when Garan overheard a conversation between the Piraka and realized that they were not Toa at all. The Voya Nui Resistance Team was then formed, consisting of Garan, Balta, Velika, Kazi, Piruk and Dalu herself. They hid away in a cavern while the rest of the Matoran colony was enslaved by the Piraka using Zamor spheres.

Dalu reported the disaster to the rest of the team, but they were too late by the time they arrived at the scene. They were able to follow the Matoran Dezalk, however, who led the team into Mount Valmai where they were able to witness the enslaved Matoran draining lava from the volcano.

When the Toa Nuva arrived to find the Kanohi Ignika, Dalu, along with the others remained hidden, fearing that they were another group of Piraka. The Toa Nuva were then defeated by the Piraka and their masks and tools stripped away. When the Piraka carried the Toa to be dumped into the Volcano, a sudden eruption caused the Piraka to drop the Toa. The Toa managed to escape, and were then confronted by the resistance team except for Balta, who had gone missing. The team believed the Toa Nuva to be imposters, and a fight occurred. During the fight, Dalu used her Chargers to drive Gali insane. However, Axonn later intervened and the effects were reversed. The fight ceased after Balta appeared, stating that the Toa Nuva were indeed Toa and not more menaces.

Working together, the Toa and Matoran stormed the Piraka fortress, retrieving their masks and tools. The united teams fought against the Piraka, but were stopped by the sudden appearance of Brutaka, who defeated the invaders in a single blow. The Toa were held as prisoners in a cavern which drained their powers continuously, while the Matoran were held captive in the Chamber of Truth, for interrogation.

Later, Dalu managed to escape the Piraka's captivity and ran up a hill. There, she was confronted by the Piraka Zaktan and Hakann. She was in the process of being taken back when the two Piraka got into an argument, and fought. Zaktan managed to claim victory in the fight after crushing Hakann under a boulder, and while Zaktan climbed to the Antidermis vat, Dalu took her chance and ran back to her friends.

Dalu and the rest of her team, who managed to escape, discovered the new Toa Inika. They shared details with each other, and were given Zamor Launchers made by Velika. The group was then split up, with Dalu going along with Piruk, Jaller and Hahli to free the enslaved Matoran using Zamor Spheres filled with Energized Protodermis.

The group was then reunited at the Piraka fortress, where a large battle broke out. While the Toa fought against the Piraka, Dalu and her team rushed to find the Toa Nuva. After a period of searching, the team was successful and freed the six Toa. The Toa Nuva and the Resistance Team rejoined with Axonn and the Toa Inika, who managed to retrieve the Mask of Life before the Piraka in the Chamber of Life, although it had plunged into the sea and down towards Mahri Nui and the Pit. The Toa and Order of Mata Nui member split up, with the Toa Inika proceeding to the waters beneath while the Toa Nuva returned to Metru Nui and began to prepare the universe for Mata Nui's reawakening. When questioned, Axonn volunteered to remain behind to guard and protect the Matoran.

As a result of the efforts of the Toa Mahri, the Cord, a stone cord which held Voya Nui anchored to its location, was broken, as was necessary for the revival of Mata Nui. As a result, Voya Nui plunged down into the sea with the Matoran on it, who had been reunited with the Matoran of Mahri Nui, hiding with Axonn in the Nui Caves of Voya Nui. Dalu returned to the Southern Continent afterwards.

After the death of Makuta Teridax while he was in control of the Matoran Universe rendered it uninhabitable, Dalu and the rest of the universe's denizens emigrated onto Spherus Magna.[1][2]

In this alternate universe, Dalu was one of the Matoran transformed into a Toa by the Takanuva of that universe.

In her early life, Dalu was docile and reserved as most Ga-Matoran are. However, the circumstances of life in Karzahni and Voya Nui molded her into a fierce warrior with no fear of speaking her mind. Dalu is valiant and loyal to her friends, but has a bit of a temper, once getting irritated enough to smash a rock wall with her head.

She is a great swimmer and has enhanced lung capacity. These abilities are shared by all Ga-Matoran.

Dalu carries Chargers, tools capable of briefly increasing one of the target's attributes (such as speed, strength, senses, etc.), though this charging tires Dalu out. She can use her Chargers offensively, heightening an enemy's senses until they become unbearable. She even once drove Gali to madness by enhancing the Toa's sight until she could see all of existence at the molecular level.

8726 Dalu was released in early 2006 as one of the six small sets, consisting of twenty-five pieces. She can also be combined with Garan and Kazi to make a Dagger Spider.