Navigation
BS01 Pages
donate
Wiki tools
In other languages
From BIONICLEsector01
Revision as of 05:00, 26 April 2015 by Morris the Mata Nui Cow (talk | contribs) (This is a quasi-parent page, so I'm being a bit more lax with the intro)
(diff) ← Older revision | Latest revision (diff) | Newer revision → (diff) 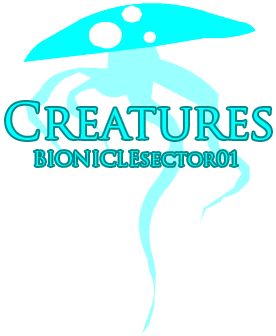 Creatures are non-sapient organisms that were not expressly created to reside in the Matoran Universe. Organisms that meet the above criteria yet live in the Matoran Universe are still considered creatures, although they are often misclassified as Rahi. All known creatures are native to Spherus Magna and are organic to some degree. Those creatures that do have a bone structure possess a metallic one.

The creatures of Spherus Magna vary in terms of biomechanical composition. Some are entirely organic, while the bodies of others, like Rock Steeds, have various biomechanical elements. They reproduce biologically, and although there may be some variety in the way this is achieved, it is known that Sea Squids, at least, lay eggs.