Competitions is a stub.
You can help the wiki by expanding it.

LEGO has periodically held Competitions (or Contests) involving BIONICLE, dating back to the line's inception in 2001. These competitions have taken various forms and resulted in a number of different prizes. Many competitions were held directly through LEGO's free Magazine, while others were hosted by promotional partners such as Cartoon Network.

Build Your Own BIONICLE Web Site

The Build your Own BIONICLE™ Web Site Contest was one of the first BIONICLE contests, and tasked entrants with designing their own website based around the BIONICLE theme. The contest was divided into two categories: "13 and Over" and "12 and Under", with the winners of each category receiving a 14k Solid Gold Hau. The winner for the 13 and over category was Kelly McKiernan (later webmaster for BIONICLE.com) and the winner for the 12 and under category was Jacob Andreas.[1][2]

The BIONICLE Toa Nuva Sweepstakes was a 2002 contest held by American cable television channel Cartoon Network. Participants were asked to validate an email address to enter.[3] The contest began in October and lasted until October 21, 2002.[4] The grand prize was one of the limited solid gold Hau masks produced by LEGO.[5]

Search For The Seventh Toa (LEGO)

Cartoon Network hosted a sweepstakes in the fall of 2003 that was also titled Search For The Seventh Toa. The contest featured a unique, one of a kind collectible prize: a platinum Kanohi Avohkii. Other prizes included BIONICLE sets from 2001-2003.[6] Participants were asked to call in during the commercial breaks of Cartoon Network's Toonami block on Fridays, in order to reach an operator and be placed on the entry list.[5][7] The contest ran from September 26 to October 17, 2003.[8] 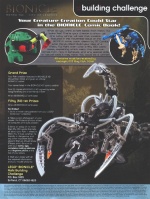 The Rahi Building Challenge was announced in the March/April 2004 LEGO Magazine, and was the first BIONICLE competition to feature a prize of appearing in the story. Entrants were asked to build a Rahi of Metru Nui, with the winner being drawn in an issue of the BIONICLE comic series. The winner was Justin Lamb, who designed the Tahtorak; the model was featured in Comic 21: Dreams of Darkness, made an appearance in BIONICLE Adventures 8: Challenge of the Hordika and appeared on the cover of the BIONICLE: Rahi Beasts guide. Other winning models of the contest featured in the Rahi Beasts Guide, including Archives Mole, Artakha Bull, Blade Burrower, Catapult Scorpion, Crystal Climber, Dermis Turtle, Doom Viper, Fader Bull, Frost Beetle, Furnace Salamander, Kanohi Dragon, Metru Mantis, Phase Dragon, Proto Drake, Razor Whale, Silver Chute Spider, Spiny Stone Ape, and the Vahki Hunter. The "Yari" model was among the winning models,[9] but it was excluded from the Rahi Beast Guide. The Rock Lion was another winner of the contest, but the builder did not submit the model for an official photo, so it was reduced to a mention in the guide.[10]

Announced in the January 2005 LEGO Brickmaster Magazine was the Toa Building Challenge, a competition asking entrants to build a Toa who "once lived in Metru Nui, but vanished on a dangerous mission". The Toa would make an appearance in BIONICLE Adventures 10: Time Trap. John Dexter won the contest with his model Krakua, the Toa of Sonics, although his storyline role was later changed.

Catch the Power of the Visorak

Prizes for Catch the Power of the Visorak

Cartoon Network held a Catch the Power of the Visorak! contest in October of 2005.[11] Much like their Search For The Seventh Toa contest, contestants were required to call in during a specific programming block (in this case, Miguzi) in order to be placed on the entry list.[12] The grand prize was a life-size statue of Visorak Keelerak built out of LEGO System bricks, while other prizes included BIONICLE products from 2005.[13]

The BIONICLE Fusion Building Challenge was a contest featured in the January-February 2006 LEGO Magazine. The challenge was to merge two of the Piraka into one monstrous being. The winner was Benjamin P. (BZPower member and Staff Writer ChocolateFrogs), and his creation appeared in Comic 5: In Final Battle as the Piraka Fusion.

The BIONICLE Super Stronghold Building Challenge was a competition featured in the July-August 2006 LEGO Magazine. The contest tasked entrants with building a fortress for the Toa Inika (who did not receive their own in the story) out of their own LEGO pieces, focusing on the minifig scale used in the playsets. Entrants were also asked to include a 200 word essay describing the special features, such as defense mechanisms, of their fortress. Five winners were selected and awarded with a free LEGO set, and their models were featured in the November-December 2007 issue.

The Comic Cover Contest was an art competition featured in the March-April 2007 issue of the LEGO Magazine. Entrants were tasked with drawing a comic book cover showing Toa preparing for battle in Mahri Nui, with the winning design being adapted for a future comic issue. The winner was Ryan N. whose illustration was used as the basis for Comic 10: The Death of Mata Nui's cover, drawn by Stuart Sayger.[14]

Prisoners of the Pit Building Challenge

The Prisoners of the Pit Building Challenge was promoted in the March-April[citation needed] 2007 issue of LEGO's Brickmaster Magazine. The challenge was to build the prisoners of The Pit. Winners of the contest were: Drewdika by Andrew Hugna, Tinnurron by Andy Urschel, Xyron by Christopher Sanchez, Zakron by Ethan J. Slepitis and Zarnak by Dale Cerett. In 2011, the BZPower Bionicle Story Squad requested of Greg Farshtey to canonize the models, although the names were not canonized as that would require sending them through LEGO's legal team.

In January 2008, a BrickMaster-exclusive Makuta Building Challenge was announced in that month's BrickMaster magazine. Entrants were asked to create a Brotherhood of Makuta member to aid in the assault on Karda Nui, with the grand prize winner's creation appearing in the 2008 story. The grand prize winner was Sarah Newkirk, whose model now represents the former Brotherhood of Makuta leader Miserix, although he was never present in the battle of Karda Nui, instead attacking Teridax directly in the Core Processor. In addition to the grand prize winner, four first place winners were chosen to appear alongside the winner in the May/June BrickMaster magazine. The four first place winners were: Olena Zozulevich, Nick Santoni, Jonas Liptak, and Joshua Guthrie; who is also known as ~GreenBioGuy~ on BIONICLEsector01 and BZPower.

The Glatorian Building Challenge was a contest featured in the September-October issue of the LEGO Magazine. Entrants were tasked with building a Glatorian warrior, with prizes going to the 20 best entries.

Who Am I? Contest

In March 2010, the Who Am I? contest was announced in the final comic of the BIONICLE Glatorian series. Entrants were asked to create a biography for a character based on a combiner model of the six Stars sets of 2010. The winner of the contest had their character featured in The Powers That Be, who was named as Gaardus.

Battle For The Gold Mask