"The Coliseum towered over the city. It stood at the junction of all six metru, so tall it looked as if it must touch the sky."
— Narrator, Legends of Metru Nui

The Coliseum, sometimes called the Great Coliseum, was a massive building located at the center of Metru Nui that was considered to be pivotal to the society of Metru Nui. 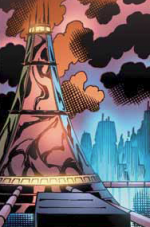 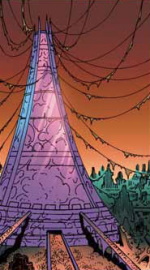 The Coliseum during the Visorak occupation of Metru Nui

The Coliseum was the first building constructed in Metru Nui, made with the help of Helryx. The building was used to store Great Kanohi for Toa, but after the construction of the Great Temple in Ga-Metru, it was used for storage of items deemed too essential to go into the Archives, and for other things that did not belong anywhere else, but were still too valuable to melt down or get rid of. A statue of Toa Mangai leader Lhikan was at some point, erected in the Coliseum in his honor.

The Coliseum is where Teridax dwelt while impersonating Dume. Here, he carried out his plan of the capture and imprisonment of the Matoran of the city. He also had a throne in his personal chamber and a sundial, with which he kept track of the time until the eclipse. Later, the Toa Metru came to the Coliseum during one of the Akilini tournaments bearing the Great Disks as proof of being Toa. Teridax manipulated the arena's columns to humiliate them, capturing Whenua, Nuju, and Onewa with another feature of the arena while the rest of the Toa fled by collapsing the statue of Lhikan. Teridax then called the Matoran to the Coliseum and used the Vahki to force the Matoran into Matoran Spheres. The Toa Metru eventually met up underneath the building, escaping Lohrak and the Vahki with an outdated Vahki Transport stored there. Teridax then drained the energy from the power plant in an effort to restore his power, sending an energy surge through the city and wrecking most of it.

The Toa Hordika at gate of the Coliseum

The Coliseum was later used as a base for the Visorak hordes during their occupation of the city. They modified it for defense, adding Rhotuka launchers to various gates manned by Visorak mutated by Roodaka.[1] The Toa Metru were mutated into the Toa Hordika here, and Vakama, giving into his Hordika side, brought the five captured Rahaga here to present to Sidorak. The Rahaga were suspended from a pole toward the top of the Coliseum where they were rescued by Norik when the Toa Hordika faced off against the horde and its leaders, Roodaka and Sidorak, with the help of Keetongu and the Rahaga. They were subsequently turned back into Toa Metru.

During the Dark Time, the Coliseum was inhabited by Turaga Dume, Keetongu and the Rahaga, who kept guard on the city from the balcony.

Soon after the Matoran returned to the city, it was discovered that the foundations of the Coliseum were in disrepair, buckling and collapsing and for several weeks. The Turaga suspected that it had something to do with the impending doom of the Great Spirit, but they were unable to do anything about it.[2] When the Toa Mahri returned to Metru Nui, a ceremony was held in the Coliseum honoring Matoro's sacrifice to revive the Great Spirit, and Turaga Onewa would later carve and erected a statue of him there. 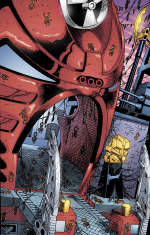 However, the eleven Toa thought of a better idea, and, after convincing the Turaga it would work, Jaller, Norik, Pouks, and Nuparu cracked the Coliseum's foundation and created a tunnel. Meanwhile, Hewkii, Kualus, and Bomonga used their powers of Gravity, Ice, and Mask of Growth, respectively, to hold the gigantic structure aloft. Hahli and Gaaki also used their power over Water to cool the tunnel's walls. The Toa Hagah, after having Norik convince the Toa Mahri to stay behind in case Teridax would escape, entered the tunnel, leaving Hewkii alone in keeping the Coliseum up. Upon entering, Norik and Pouks sealed the entrance, and Hewkii slowly lowered the Coliseum before passing out.

The Toa Nuva at the Coliseum

Shortly afterwards, in front of the Coliseum, Johmak brought the Heart of the Visorak and told the Toa Mahri to take it to Artidax, explaining what it was. After only Jaller, Hahli and Nuparu left the city, Johmak ambushed Hewkii and Kongu when they returned to the Coliseum, knocking them out.

The Order of Mata Nui, upon occupation of Metru Nui, confined the Turaga in the Coliseum when they refused to be compliant with their plans. Hewkii and Kongu were also confined here, and upon regaining consciousness, Johmak revealed the Order's intentions of transforming Metru Nui into a fortress, including barricading the streets to the Coliseum. The Dark Hunter Voporak arrived during this time, breaking through a wall in the Coliseum and incapacitating six armed Ta-Matoran. He stole the Kanohi Vahi from the secure chamber in the Coliseum as Vakama arrived to check up upon the Vahi, and departed, killing a four-armed Order warrior outside.

After the Siege of Metru Nui, Turaga Vakama and Dume declared a celebration in the Coliseum. During the celebration, Dume presented a victory speech but was interrupted by Teridax, who revealed his takeover of Mata Nui's body and the Matoran Universe. Teridax sent in Rahkshi to terrorize Metru Nui's inhabitants, forcing them to evacuate the Coliseum and retreat into the Archives.

Sometime later, when Teridax took complete control of the city, the Turaga of Metru Nui were imprisoned in the Coliseum.[3]

Along with the rest of Metru Nui, the Coliseum was greatly damaged when a fragment of Aqua Magna impacted the Core Processor during Teridax's battle with Mata Nui. The surviving Matoran evacuated the Matoran Universe for the surface of Spherus Magna. Later, the Coliseum, along with all other locations in the Matoran Universe, was dismantled.[4][5]

A reconstruction of the Metru Nui Coliseum is situated on the island of Mata Nui in an alternate universe. Here Turaga Takanuva and his council oversee the Kingdom of the Great Spirit.

In the Coliseum of this alternate universe, there is a chamber known as the Hall of Masks. This is where Kanohi masks and objects of great power are stored. Items known to be kept there included Brutaka's Olmak and Rotating Blades.

Pohatu's and Lesovikk's resistance group attacked the Coliseum, with Pohatu destroying part of its wall to create an opening for the group. As they battled outside, Takanuva entered the Coliseum with Darkness and went to the Hall of Masks, where he was confronted by Tuyet. In the ensuing fight, more of the Coliseum was damaged, including six walls that Takanuva was hurled through. During the fight, an army of Dark Hunters, Matoran, Vortixx, and others amassed on the Coliseum.

A corridor in the Coliseum

The Coliseum houses the power plant which produces energy for the entire city, generated by the flow of Liquid Protodermis underneath the building on its way to the rest of the city. The ground underneath the Coliseum is also a massive storage space used for items of critical significance to the city. The central arena was also housed here, where Matoran held Akilini tournaments hosted there four times a year. The arena floor was made up of hundreds of Protodermis columns which could be raised or lowered at will, producing 'waves' for the players to ride. A complex system of retractable Chutes was also stationed in the arena, and would be extended or retracted randomly for the players to go through. 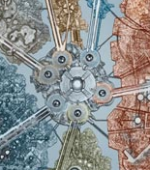 An aerial view of the Coliseum

When not being used for Akilini, the Vahki would use the arena for training exercises. The arena was also used by Turaga Dume for major announcements to the Matoran of the city, and so held enough seating for all inhabitants of Metru Nui. Dume overlooked the arena in a specially made box that could be raised or lowered through use of increase weight and levitation Kanoka. It was from here that Dume controlled the Telescreens located around the city.

The gate of the Coliseum was released in 8759 Battle for Metru Nui , one of the four playsets of 2005. This set depicted the Coliseum in its form after modification by the Visorak. Two glow-in-the-dark Rhotuka Spinners could be fired from the Hau-shaped gate or from the back of a giant Kahgarak spider, also included in the set. The set featured minifigures of the six Toa Hordika and each of the six breeds of Visorak. Traps in the walls released flaming boulders, and spears could be hurled from either side of the front entrance. There were also catapults from which flaming boulders could be launched.

The buildings around the Coliseum