This article is about Nuparu's tools. You may be looking for Onua's. 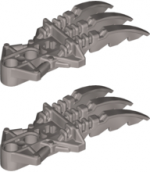 Toa Inika Nuparu's Claws were his secondary Toa Tools and were actually part of his hands.[1] They could help him dig at great speeds and channel his Earth powers intertwined with electricity. They were lost when he was transformed into a Toa Mahri.

The claws were included in 8729 Toa Nuparu.