"They are smaller, quicker creatures that act as scouts and couriers."
— Turaga Vakama, Beware the Bohrok

Bohrok Va are scouts and messengers for the Bohrok. Unlike the Bohrok, they are not controlled by the Krana; they are completely robotic, although they still obey the Bahrag. Created by the Great Beings, they will often bring Krana to fallen Bohrok so that they can continue cleansing the surface of Mata Nui's face.

The Bohrok Va were created by the Great Beings to assist the Bohrok in clearing Mata Nui, reverting it to its original status as a barren wasteland. Upon creation, the Va were placed in hibernation along with the other breeds of Bohrok, waiting for the time to be awakened to perform their duty.

When Makuta Teridax prematurely activated a beacon to awaken the Bohrok swarms on the island of Mata Nui, the Bohrok Va were dispatched and began their duty to assist the Bohrok swarms. Several Kohrak Va and Pahrak Va were present during the Toa Mata's first encounter with the swarms. Like their larger counterparts, they were scared off by the thunderstorm created by Lewa and Gali. A group of Pahrak Va accompanied a swarm of Pahrak to Ga-Koro during their invasion of that village. There, they helped the Bohrok reach the Matoran by replacing their Krana Xa with Krana Vu, which then enabled them to fly. One Tahnok Va inadvertently led Kopaka to finding the Bohrok Nests, due to the Toa of Ice following the creature when it was retreating there.

After the defeat of the Bahrag, the Matoran believed that the Bohrok Va had been incapacitated as the Bohrok had, and would follow their commands, so they set them cleaning up the damage the Bohrok had left. However, the Va, having independent programming, had not changed, and used the opportunity to scout out the villages. When the Bohrok-Kal appeared, the Va helped them break into the Koro. The Va would continue to serve the Kal until they were ordered back to the nests with the Bohrok by the Bahrag, although they were not set to sleep as the Bohrok were.[1] They were later reawakened by the Bahrag's signal and served the Bohrok Swarms as the island was cleaned, returning to their nests once they were done.

The Bohrok Va are entirely mechanical, not needing Krana as the Bohrok do, in order to bring Krana to the Bohrok in the event that the Bohrok are disabled. They also act as couriers and scouts for the Bohrok. 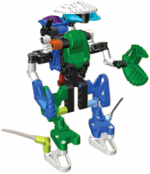 Bohrok Va also have the ability to merge and form Kaita, much like the Bohrok do.[2]

There are six breeds of Bohrok Va, one for each of the standard Bohrok types. Each breed of Bohrok Va shares physical characteristics with its corresponding Bohrok breed, but did not control any Elemental Powers.

The Bohrok Va were released in Spring 2002 along with a dormant Krana of its assigned Bohrok. They also had a promotional release with Kabaya sweets in Japan. Each Bohrok Va was constructed so that if one were to push down on their left arms, the Krana on their backs would fly forward.