"Tell us where you have hidden the Bahrag and then stand aside. We have no wish to harm helpless foes."
— Pahrak-Kal, Powerless!

The Bohrok-Kal were six elite Bohrok, created by the Bahrag as a failsafe. Their mission was to awaken the queens of the swarm in the event of their defeat.

The hibernation nest of a Bohrok-Kal

In the early years of the Matoran Universe, the Bohrok-Kal were created by the twin queens of the Bohrok swarms, Cahdok and Gahdok. The Bahrag exposed six Bohrok, one from each swarm, to a mutagenic substance. These Bohrok acquired new elemental powers, replacing their previous powers, and were piloted by Krana-Kal, advanced versions of the Krana worn by regular members of the swarm. They also gained the ability to communicate telepathically and speak the Matoran language. The Bohrok-Kal were fitted with silver armor and given special reptilian markings to distinguish them from other members of the swarms. They were then hidden in a special chamber far from the Bohrok Nests, and remained in hibernation for nearly 100,000 years.[2] 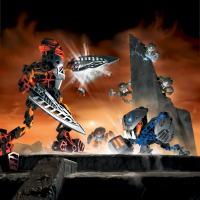 After the Toa Mata used their elemental powers to trap the Bahrag in a Toa Seal and were subsequently transformed into Toa Nuva by means of Energized Protodermis, the Bahrag sent a telepathic signal for the Bohrok-Kal to awaken. The queens ordered the Bohrok-Kal to steal the Nuva Symbols from each village, bring them to the cave where they were imprisoned, and place them onto the Nuva Cube. The Bohrok-Kal completed the first step of their task with success, and the Toa Nuva were left powerless.

The Bohrok-Kal approach the Nuva Cube.

The Toa Nuva united and followed the trails of the Bohrok-Kal until they arrived at a tunnel entrance made by Pahrak-Kal. It led into a cave where the Toa Nuva found a hole, which in turn led to the Bahrag's lair. Feeling that the edges of the hole were still hot, they were careful and sent Lewa down it to survey activity below. Inside the lair, Lewa witnessed the Exo-Toa attempting to defend the Nuva Cube from the Bohrok-Kal. However, the Bohrok-Kal overpowered the machines and prepared to awaken the Bahrag. By the time that the Toa Nuva entered the chamber, the Bohrok-Kal had already touched the Protodermis cage with their Krana-Kal.

In desperation, Tahu called upon the power of the Kanohi Vahi, which he had received from Turaga Vakama. Slowing down time around the Bohrok-Kal, he ordered the Toa Nuva to retrieve the symbols, but the Bohrok-Kal's Krana-Kal turned silver and it created a shield blocking them from outside threats. Gali then conceived a plan to defeat the Bohrok-Kal. Reaching out to their Nuva Symbols, the Toa Nuva channeled their Elemental Powers through the Bohrok-Kal. This was too much power for the Bohrok-Kal to control and one by one, they fell to their own power. All of the Bohrok-Kal were destroyed except Lehvak-Kal who was jettisoned into orbit around Aqua Magna, although even he was later destroyed during the gravity blasts and planetary movement during the Battle of Bara Magna. The Bahrag remained confined in their prison, and although the Krana-Kal managed to escape the destruction of the exo-shells, these were later captured by the Turaga.

The Bohrok-Kal were immensely powerful and effective in the use of their Shields to exert Elemental Powers. They were powered by Krana-Kal and could telepathically communicate in the Matoran Language.

The Bohrok-Kal also shared many of the physical characteristics of their regular cousins. They possessed the head-snapping attack for launching Krana-Kal, the ability to fold up into ball for mobility and hibernation, and the ability to transform into Kaita.

The Bohrok-Kal were also very arrogant and boastful. They were completely dedicated to their mission and considered anything that interfered with them as an obstacle.

The Bohrok-Kal in set form

The Bohrok-Kal were released in early 2003 as canister sets, with each containing forty pieces. They were the normal Bohrok sets with silver pieces and a new head plate with a design in their respective elemental colors. When a lever on the back of the Bohrok-Kal was pressed, its head would shoot forward, and snap back when the lever was released. They were also each released with a random, rubbery Krana-Kal. Some sets were randomly packaged with Bohrok-Kal Mini Promo CDs, containing information about the respective Bohrok-Kal and one of the Toa Nuva.

"Bohrok-Kal, your quest must fail -- the creatures you seek have vanished from Mata Nui."
"You lie! They are here and we will find them."
— Tahu and Nuhvok-Kal, Makuta's Revenge