"Some believe the world of Bara Magna to be only a vast, unending desert. But they are wrong. The Black Spike Mountains loom over the northern region of the planet, and today Mata Nui walks among the peaks."
— Narrator, Valley of Fear

The Black Spike Mountains is a mountainous region to the north of Bara Magna.

The Element Lord of Rock ruled these mountains. During the Core War, no fighting occurred in the Black Spikes due to the treacherous nature of the region.

After being cut off from their homeland as a result of the Shattering, the Skrall took up residence near the Black Spike Mountains, dominating the area. The Skrall lived within the mountain range for tens of thousands of years, never foraying outside its perimeter. One day, they were attacked by a band of mechanical shapeshifters called Baterra, who struck down many of the Skrall, and all but one of the leader class Skrall. Eventually, the Skrall moved out of the area and migrated through the mountains, into the village of Roxtus.

On their mission to deliver Exsidian, the caravan of Strakk, Gresh, Tarduk, and Kirbold traveled through the foot of the mountains, seeking to avoid Bone Hunters. Malum confronted them, and warned them about Skrall. Soon after Skrall warriors halted the caravan, but the group lied they needed to see Tuma, so the Skrall began to escort them. Hitting them with Exsidian they urged their Spikit on and fired Thornax at the Skrall, causing an avalanche burying them. The Skrall left, but Fero arrived and later decided the Glatorian still alive. In reality, they were trapped in a tunnel in the mountains, finding some Matoran writing. They were briefly attacked by Scarabax Beetles, but they ate a Sand Bat instead, Tarduk pressing some of the runes. The walls began to close in as an exit opened, and the group reached the Dark Falls. Malum and his Vorox then surrounded the group, having defeated Fero, and Malum sent Gresh and Strakk to retrieve a Flame Sword in Roxtus. Returning Gresh coated himself in glowing minerals to scare the Vorox as he and Strakk saved the Agori, but the caravan went off the Dark Falls. Luckily Ackar and Kiina saved the crew, and left, creating a plan for getting a new caravan. Strakk lured Stronius and Skrall to load up the Exsidian on a caravan, Stronius then attempting to kill Strakk. The rest of the convoy ambushed the Skrall, saved Strakk, and rode into the desert, the Skrall pursuing. 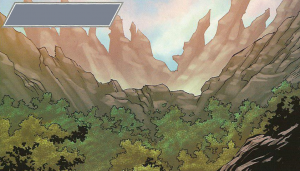 A region of the Black Spike Mountains

Mata Nui, Ackar, Kiina, Gresh, and Berix later journeyed through the Black Spike Mountains in search of the Valley of the Maze, where they were attacked by a small group of Skrall. During the conflict which followed, Berix was injured by a Thornax, and Mata Nui decided it was best for him to continue the rest of his journey with Click alone.

During the confrontation between Mata Nui and Teridax, the latter fired a laser towards one of the peaks, causing it to melt under the extreme heat. When the Great Spirit Robot fell, it crushed some of the mountains.

When the two moons of Bara Magna merged back into the planet, the remaining mountains became part of Spherus Magna once more.

In this alternate universe, Makuta Teridax guided the Matoran Mazeka and Vultraz through the mountains to the Valley of the Maze.

The Black Spike Mountains are part of a large mountain range, located far to the north of Bara Magna. The landscape is treacherous and dangerous enough to remain unexplored. The region is also very volcanic and unstable. The mountains are also honeycombed with secret tunnels previously used by the Great Beings.

The Dark Falls is a waterfall located near the outskirts of the Black Spike Mountains region, and is part of the upriver of the Skrall River.

A Bone Hunter refuge called the Gatherers Hideout is located underneath the Dark Falls.

The Skull Mountain is a mountain in the Black Spike Mountains region, and was where the village of Roxtus was located. The head of the Great Beings' original giant robot was embedded in the mountain, giving it its namesake.

After mysteriously appearing and wiping out much of the Skrall population, these violent, Shapeshifting entities eventually drove the Skrall out.