"Look, did you ever think maybe you weren't the only one that needed to believe there was something more?"
— Berix to Kiina, The Legend Reborn

Berix is an Agori living on Spherus Magna, and is a member of the Water Tribe.

Prior to the Core War, Berix lived on Spherus Magna with other members of the Water Tribe, who were ruled by the Element Lord of Water. He befriended the Iron Tribe warrior Telluris, the two bonding over their love of machinery. Berix learned much from the warrior, though Telluris eventually rejected society out of fear and paranoia. When the Shattering occurred, Berix was in the Great Barren which split off and formed a new planet, which was then called Bara Magna.

At some point after the Shattering, Berix was hired by the Fire Agori Crotesius to help excavate an old vehicle that was buried to the north of Vulcanus. It was badly damaged, but Berix managed to acquire a pair of rear tracks for it, and the two Agori finally made it functional.

A few months prior to the war with the Skrall, Berix offered himself to Scodonius as a replacement for Kirbraz on the Kaxium V3 team, as the other Agori had been injured. Scodonius agreed, intending to torment the Agori after he accepted. Berix eventually quit.

At one point during his travels, Berix discovered the Underground Lab of the Great Beings, and found within it a strange coin marked with mysterious symbols. The Glatorian Kiina, who had been using the lab as her private sanctuary, discovered his presence and warned him never to return there again. Berix disobeyed her wishes and came back into the cavern several times, managing to fix the lights in the place. 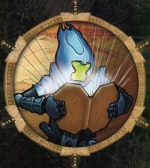 Berix reading the Book of Certavus

During one of his scavenging trips, Berix discovered a piece of parchment, which he identified as being a part of the Book of Certavus. Keeping the scrap handy, he later traveled to Tesara with Tarix, who engaged in a practice match with Gresh. Gresh, after being defeated, resolved to find a better move to defeat his opponents with. Hearing this, Berix approached him, showing him the piece of paper he had found. Gresh implored the Agori to show him where he found it, and Berix agreed, on the condition that Gresh act as his guard while he searched for more scraps in the desert. Gresh complied, and the two set out into the desert. During their travels, they encountered a group of Vorox, who drove the pair into an unused arena, littered with broken practice dummies. Though a Vorox managed to break in, Berix accidentally scared it off with a practice dummy. Gresh, noting the Vorox's behavior, set up a number of the dummies on the roof, and succeeded in driving the rest of the pack off. As they were about to leave, Berix stumbled upon the Book of Certavus. He offered it to Gresh, but the Glatorian declined, having figured out what he was doing wrong, and what he could do to fix it.

One day, Berix journeyed far from his village of Tajun to salvage old armor to use in the arena. Unfortunately, he encountered the Bone Hunter, Fero, and his Rock Steed, Skirmix, who chased him through the desert. The Bone Hunter was about to kill Berix when he was stopped by Gresh, Strakk, and Tarix. Berix thanked the Glatorian but mentioned he did not have a way to repay their kindness. Although Strakk complained, Gresh stated that saving a life required no return. The group was then attacked by a pack of Vorox, but the battle ended soon after, when Malum signaled for the Vorox to retreat. Berix then parted ways with the trio of Glatorian. Tarix later caught up with Berix, and the two engaged in a discussion.

Berix was later accused of stealing an Ancient Spear from the Atero trophy offering, placing his entire tribe under suspicion. An Agori, tasked by Raanu to seek the aid of the Glatorian in defending the village of Vulcanus from Bone Hunter raids, traveled to Tajun, and encountered Berix. Berix revealed that he had been accused of stealing the spear, and the ramifications if the spear was not found. Eager to clear his name, he told the Agori that if he could find a way to make another Ancient Spear he could prove his innocence and the Glatorian Tarix would gladly aid in defending the Fire Tribe.

Berix then proceeded to help the Agori salvage the pieces needed to reconstruct a spear, and his name was eventually cleared when the traveling villager gave the completed spear to Tarix.

Berix traveled to the Arena Magna, in order to watch the yearly Great Tournament. While watching a match, he mentioned the lack of presence of the Skrall to Raanu and Metus. The three decided to leave the tournament and head outside the city, to see if the Skrall were simply approaching late. When they reached the outer limits of the city, they saw the Skrall had formed an army, and were coming to invade Atero. Berix and Metus fled, while Raanu departed to warn the competitors. Berix later regrouped with Raanu and Metus, along with several Glatorian, in a safer location. 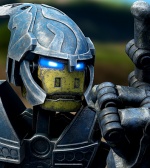 Berix in The Legend Reborn

When the Skrall attacked Tajun, Berix stayed behind to ensure the safety of his collection, and hid in Underground Lab of the Great Beings. He was found by Kiina, Mata Nui and Ackar, who had come into the chamber with an injured Gresh. Despite Kiina's initial refusal, Berix was eventually allowed to heal Gresh, who soon recovered.

Berix accompanied the Glatorian out of the village, and to the village of Tesara. When they arrived in Tesara, Berix spotted an axe that interested him, and attempted to take it. Kiina saw his attempt and berated him for it, though he later retrieved the item when she had gone. Having scavenged items from Agori in Tesara before, Berix decided to lay low, and avoid contact with others. He later traveled outside of the village, and was confronted by Kiina and accused of being the traitor. Metus approached them, and ordered Bone Hunters he had assembled to kidnap them. Berix and Kiina were taken to Roxtus, and imprisoned in hanging chambers. While imprisoned Kiina and Berix talked things over and settled their differences.

Mata Nui arrived in Roxtus, and defeated Tuma, freeing Berix and Kiina. As a number of Glatorian arrived to combat the Skrall, Kiina told Berix to keep close to her in the battle, handing him a Saw Blade Shield, and charged off to fight. Berix attempted to leap off a cliff into the battle, but failed in his efforts, and landed on a Rock Steed instead. In its attempts to buck him off, the Rock Steed inadvertently took out a number of Bone Hunters. In a joyous outburst at surviving a battle, he accidentally knocked out the final Hunter. He was buried under rubble in the ensuing fight, and attempted to alert the Glatorian to his presence after the battle was over. Kiina recovered him, and embraced the Agori, having been worried about his absence.

While visiting Mata Nui, who was overseeing the unification of the villages, Berix realized that the new Mega-Village pieces made a humanoid form. The shape reminded him of the coin he had found before, and he showed it to Mata Nui. He also advised the warrior to flip the coin, and held out the Skrall shield he had kept, which matched the pattern on the reverse side of the coin. Berix became the official chronicler of the city, and decided to accompany Mata Nui on his journey.

Shortly after the battle at Roxtus, Berix helped repair the Kaxium V3, which had been badly damaged in the fighting. Scodonius subsequently apologized for treating Berix badly, and made him the third member of the vehicle team.

While accompanying Mata Nui, Ackar, Gresh, and Kiina to the Valley of the Maze beyond the Black Spike Mountains, the group was attacked by a small band of Skrall. Berix was injured by a Thornax in the battle, and Mata Nui insisted on making the rest of the journey alone, to prevent more harm from coming to his friends. Berix was accompanied back to the Mega-Village by the other Glatorian, leaving Mata Nui and Click to continue their journey.

When Mata Nui returned from his journey, he was able to power the robot that the Agori had turned into their village, the Agori having been evacuated. He used it to fight against Teridax after he arrived on Bara Magna in Mata Nui's old body. Meanwhile, Berix, who had recovered by then from his injuries, joined the Glatorian and other Agori in distracting Teridax and fighting against his Rahkshi.

They were relieved from battle with the Rahkshi with aid from Tahu using the Golden Armor, which defeated the Rahkshi. Mata Nui was then able to complete his mission of reforming Spherus Magna from Bara Magna, Bota Magna and Aqua Magna, allowing the Glatorian and Agori to live with fewer troubles as he revitalized the planet, creating a paradisaical world. 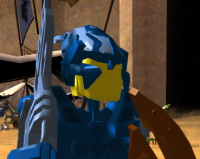 Berix is an expert at finding ruined equipment and repairing it. He also developed a minor skill in healing due to his expertise at fixing things. He is disliked by villagers and Glatorian because his scavenging is often mistaken for thieving. He always insists that his items were merely collected, though he does have penchant for claiming objects that are not his. After his assistance to Mata Nui in his efforts, he has begun to find less opposition from other Agori.

Berix carries a Water Sword and a shield.

Berix as a set

Berix was released as a set in early 2009, containing fifteen pieces.

"Like this? I made it myself. Where did I get the parts? Don't ask."
— Berix, BIONICLE.com

"You know, I've got feelings, too. And by the way, I didn't steal them."
"No, you just collected them."
— Berix and Kiina, The Legend Reborn