"Each was powerful, well armored, and a veteran of many a raid. Those who saw them said they made Toa look like some kind of Rahi that crawled out under a rock. They saw themselves as a higher level of being, preordained to rule by virtue of their superior strength and intellect."
— Narrator, City of the Lost

The Barraki were the six rulers of the League of Six Kingdoms, titled after the Matoran word for "warlord." Each is of a different species and commands a different army. After a surprise attack by the Brotherhood of Makuta 80,000 years before the Great Cataclysm, they were taken to the Pit by Botar. They nursed their hatred for the Brotherhood of Makuta, waiting for the chance to escape, and take their revenge. After the Great Cataclysm struck and destroyed the Pit, the Barraki escaped to the ocean above, where they were mutated by Pit Mutagen.

In the early days of the universe, the Great Spirit Mata Nui created the Barraki to help him bring order. However, their order came in the form of oppressive dictatorships, and each oppressively presided over their kingdoms. They eventually banded together as the League of Six Kingdoms, and between them very few places remained unconquered. During this time the League relied on the Brotherhood of Makuta for war beasts, claiming divine right as Mata Nui's appointed rulers; the Brotherhood complied but kept a close watch on the Barraki's arrogance.

Eventually, the Barraki grew so ambitious they planned to overthrow Mata Nui. However, one of their number, Takadox, was selling information to the Brotherhood, and leaked their plan. A joint force of the Brotherhood and Toa made a quick strike, led by Makuta Teridax, against the League. The six Barraki were soon captured and were about to be executed, when a menacing figure named Botar arrived, spirited them away to a prison known as the Pit, where they remained under the careful watch of Hydraxon and his robots.

The Barraki in the Pit

After eighty thousand years, when the Great Cataclysm struck the universe, the Pit began to collapse and water flooded in. The Barraki were able to escape with many other prisoners, and Takadox killed the injured Hydraxon. However, they soon discovered that the Pit had become part of an ocean and was filled with mutagen, which changed the Barraki into mutant water-breathers.

Despite this, the Barraki began their return to power, gaining the Rahi of the Pit as their minions; with their new appearances, the animals recognized them as alpha males, and submitted to them. They constructed their own fortress, but it was eventually destroyed when a city from the island above came crashing down on their fortress. They soon began to raid the city, taking Matoran one by one, never allowing a victim to see them and live.

A thousand years after the Cataclysm, the Mask of Life floated down to the Pit and became a symbol of hope which the Barraki believed could restore them to their original forms. However, they were not the only ones to desire the mask: a team of Toa had followed the mask to the Pit from Voya Nui, and had allied themselves with the local Matoran.

During their quest for the mask, the Barraki cornered Dekar, a Matoran who had found the mask. Pridak grabbed the mask, getting cursed in the process, and the Barraki went to meet the newly-arrived Toa Mahri. The Toa were imprisoned in caves guarded by sea creatures, though the Barraki insisted they were merely guests. Meanwhile, the Barraki decided to give the Ignika to Nocturn for safe-keeping as they did not trust each other. When the Toa escaped from the caves, they and the Barraki fought several times. 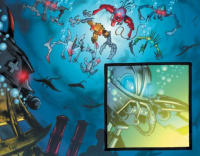 The Barraki and their armies charge the Toa Mahri.

By then, Mantax had discovered evidence of betrayal within the group. When he eventually retrieved the Mask of Life, he used it as a bargaining chip to force the traitor to reveal himself. Takadox gave himself away by trying to kill Mantax at the first opportunity, but the Toa Mahri had reclaimed the mask and the other Barraki allowed Takadox to live until they were dealt with. A Maxilos robot revealed itself to be Teridax, their ancient enemy. The Barraki attacked him and reduced the robot's body to a wreck. They then continued on to face the Toa so that they could take the mask. Before they succeeded in this task, Toa Mahri Matoro got away with the mask and the other five simply vanished, leaving the Barraki again trapped without hope.

Recently, Takadox and Carapar disappeared from the Pit. The other four presumed them dead, but they had actually been forced into a suicide mission by Brutaka. In the course of the mission, the strike team encountered the legendary Tren Krom and Carapar was killed. Soon afterward, Takadox betrayed the group and abandoned the mission, but was stranded on Artidax. He later escaped by commandeering another boat used by part of the Toa Mahri.

In the Pit, the rest of the Barraki were recaptured by Hydraxon. Hydraxon later received a message from Toa Helryx, ordering him to draft the Barraki in the Order of Mata Nui's war against the Makuta. The Barraki accepted this deal, forming armies out of the dregs of the universe to attack Brotherhood fortresses. One of these fortresses contained a record of the Brotherhood's plan for universal domination, which caused the four cohesive Barraki to approach the Dark Hunters to discuss an alliance. The Shadowed One, leader of that group, had found several Makuta viruses amongst the ruins of Xia, including a copy of the virus used to render the Great Spirit Mata Nui unconscious by the Brotherhood. After being approached by Kalmah, Ehlek, and Mantax, he agreed to meet with Pridak in Karzahni to discuss terms.

Pridak had struck a deal with the leader of the Dark Hunters, who would unleash the viruses at his disposal against Teridax, and afterward the new armies of the Barraki would strike against the Makuta. However, it seemed to Pridak that the Shadowed One had failed, so he decided to march to Metru Nui anyway. Before the Barraki's armies could reach Metru Nui, Teridax was defeated. The Barraki began to lead their armies outside of the Matoran Universe to the Spherus Magna planet. When Mata Nui sent waves of life on the Bara Magna desert, the Barraki's mutations were reversed.

The Barraki in set form

All of the Barraki were released as sets in the first half of 2007. Each came packed with a Squid Launcher and two yellow-orange Sea Squids.

"Once we six were rulers of the surface world, from Xia to the Southern Islands."
— Pridak, Web Comic

"They call themselves Barraki -- it's a Matoran word meaning "Warlord." They dwell in the depths of a strange sea, a place only the very brave or the very foolish would ever dare to go."
— Narrator, Mask of Life, Mask of Doom

"And the Barraki - 80000 years later, the same brutal bunglers, whose plans had the same delicate touch as a rampaging Tahtorak. How amusing it was to watch them fight pitched battles over the mask, scheming against and betraying each other."
— Makuta Teridax, Makuta's Guide to the Universe

"Barraki don't have friends, just people they use."
— Brutaka, Federation of Fear