"Sometimes you can't do what your heart tells you to ... sometimes you have a duty to something greater than yourself."
— Balta, Power Play

Balta is a Ta-Matoran on Voya Nui and was on the Voya Nui Resistance Team. He is Garan's best friend and right hand Matoran and is also close friends with Dalu.

Balta, like the other Voya Nui Matoran, long ago had a problem with his ability to work and was sent to Karzahni to be repaired. He was rebuilt, but in a new, weakened form. To compensate for this, he received a pair of Repellers. He was then sent to the Southern Continent to spend the rest of his days.[1] However, during the Great Cataclysm, the region of the Continent where he was living broke off into what became the island of Voya Nui, carrying Balta and many other Matoran to out of the continent's dome and onto the surface of Aqua Magna, while several others, including the Turaga, Jovan, were killed.[2] 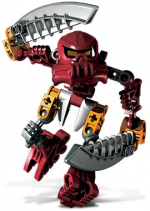 After about 1,000 years of life on the island, Balta was scouting for food when he found an empty Toa Canister and footprints in the ground that led to one of the six Piraka, named Hakann, who claimed to be a Toa. While Balta returned to the village with him, the Piraka blasted a herd of Kikanalo with his Heat Vision and incinerated them, to the Matoran's shock. Some time later, Balta was watching Avak work on what he thought would be a solution to Voya Nui's water problem, but was really the construction of Zamor Launchers that would be used to enslave the Matoran. Balta interrupted his work, asking what they were, and Avak, annoyed, trapped the Matoran in a sound proof prison.

The Piraka later had Piruk and Balta oversee teams assigned to dig vast reservoirs to collect lava from Mount Valmai. Afterwards, Garan, Kazi, Velika, Piruk, and Balta all met up in a cave, while Dalu watched outside for the Piraka. Balta and Velika examined a stolen Zamor Launcher from Avak and concluded that it was a launching apparatus and a weapon to be used, which led them all to believe these six beings were not Toa. Garan sent Balta to find Dalu, only for Balta to find Dalu collapsed from an earlier fight with Avak. While Dalu recovered, a monster created of lava and stone attacked the workers and the Piraka fought it off. However, Garan and Balta followed Avak and Hakann, and overheard them discussing that the monster they defeated was actually manufactured by the Piraka in a sham battle to convince that the Matoran that they were Toa.

When the Voya Nui Resistance Team next gathered, Piruk reported that another Ta-Matoran, Dezalk, had gathered all of the Matoran in the Matoran Cliff Village. The team decided to follow, but by the time they arrived all the Matoran were hard at work draining the lava from Mount Valmai, enslaved by the Piraka to look for something under the lava pools. The team decided that it was time to strike back, and Balta went on his own to steal Vezok's Zamor Sphere to look at its contents. However, Vezok caught him and pursued Balta as he fled. On Zaktan's orders, Thok also joined the pursuit. Balta managed to pass the sphere onto the other members off the team while he drove Thok and Vezok away from the site. Balta ran into a cave after sending Thok sprawling from the attack of his Repellers. Vezok then placed a large rock in front of the cave entrance, trapping Balta inside.[2]

Balta began to lose consciousness, but was freed by Axonn, who told him to return to the other Matoran and prevent them from attacking the Toa Nuva, who they believed to be more Piraka. Balta managed to arrive in time, but not before Gali had her sight enhanced to the point she was driven mad. Balta did, however, manage to convince Garan that these were real Toa and Axonn cured Gali unseen elsewhere, where the Toa had run in her madness.

The Toa Nuva related all the information about why the Piraka were on Voya Nui, to steal the legendary Ignika, Mask of Life. The Toa Nuva and the Voya Nui Resistance Team decided to raid the Piraka Stronghold to retrieve their Kanohi Nuva and Toa Tools. They succeeded, and then proceeded to the center off the stronghold, where the Piraka were fighting amongst themselves. The Toa Nuva and Matoran attempted to enter the fray and stop the Piraka, but were all struck down by a single blow from Brutaka.[1] Balta, Piruk, Velika and Kazi were all dumped outside the Piraka Stronghold by Brutaka, while Dalu escaped and Garan kept for interrogation by Vezok. When Balta regained consciousness, he noticed a Doom Viper slithering towards him and his friends. Just then, Brutaka used his Olmak to send the Rahi to the lava of Mount Valmai, saving the Matoran out of force of habit.

Balta and the others managed to escape and re-group without Dalu. The resistance also met up with the new Toa Inika, who had just arrived and turned into Toa after escaping from Karzahni and battling Vezok, who quickly escaped after being captured. The resistance related all that was told by the Toa Nuva about the Mask of Life and the possible fate of the Toa Nuva. Balta traveled with Kazi, Matoro and Hewkii to where Axonn was staying, only to find him battered and badly injured by Brutaka. Axonn told them to go on, as Brutaka would reveal the location of the Mask of Life to the Piraka.[3]

The individual groups united at the Stronghold where the Inika confronted the Piraka and instructed the Matoran to search for the imprisoned Toa Nuva while the battle raged. Balta found an open door in the lower levels of the Piraka Stronghold, where the Toa Nuva were imprisoned. Once inside, they realized that the Toa Nuva had been enslaved by Antidermis, and were being drained of their Elemental Energy. They managed to free the Toa using Energized Protodermis-filled Zamor spheres to cure them of the effects of Antidermis. As they all ventured to the higher levels of the stronghold to retrieve the Toa's Kanohi, the resistance team informed them of the arrival of the Toa Inika. Upon arriving, the Toa Nuva and the Matoran discovered that most of the stronghold had been destroyed. Axonn then took charge of watching over the Matoran out of fear of the Piraka, who were free on the island.[4]

After Mata Nui's death, Balta was transformed into a Toa by Takanuva.[TK] 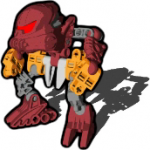 Balta as seen in the Piraka Online Animations

Balta is a brave Matoran, brave enough to risk his life to steal a Zamor Sphere from Vezok and fight back against him and Thok. He is skilled with technology, but is more apt to make small, practical devices. He is able to improvise with whatever is at hand - he can take any pile of discarded equipment and turn it into a device or weapon with ease.

Like all Ta-Matoran, Balta has a natural resistance to heat.

Balta carries twin Repellers. When crossed, his twin Repellers can repel any attack made against him, causing the attacker to be hit with an equal force.

"We haven't survived this long just to give up."
— Balta, Island of Doom

"We already have a battle on our hands, one that has been thrust upon us. We don't need to go looking for another."
— Balta, Dark Destiny