"Nuju said they sent the Toa to Voya Nui in canisters, like the ones they used to come to Mata Nui. He said there was no other safe way for them to make the journey. He said ... he said the way to Voya Nui passes through a land of the dead."
— Matoro

Dark Destiny is the second BIONICLE book in the BIONICLE Legends series. 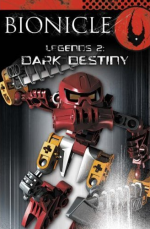 In Metru Nui, Turaga Dume holds a council with the six other Turaga. He reveals that Jaller, Matoro, Hahli, Kongu, Nuparu and Hewkii have disappeared. He accuses the other Turaga to have revealed that Mata Nui is dying, despite their efforts to keep it a secret. Nokama admits to be responsable, and Vakama proposes to send Takanuva looking for them, only to discover that he, too, is gone.

As the Matoran and Takanuva make their way to Voya Nui, they come across a dark tunnel that Takanuva chooses to scout out solo. Unfortunately, the tunnel disrupts his powers and he becomes lost.

On Voya Nui, Garan and Dalu think about Balta and where he is, when Piruk tells Garan the Piraka are about to throw some people in the Lake of Lava.

On Mount Valmai the Piraka, minus Zaktan, have dragged the unconscious Toa Nuva to the edge of Mount Valmai, but before they can dispose of them, the volcano erupted. While the Piraka flee, the maskless Nuva regain consciousness and manage to escape the lava flow. From a distance, the Matoran resistance spots the Toa Nuva and, thinking them to be more enemies, decides to attack them. Meanwhile Balta, who has been trapped in a cave by Vezok, is losing hope when Axonn frees him and sends him to stop his friends.

Near the dark tunnel, the six Matoran decide to go looking for Takanuva. While crossing the tunnel Matoro, blinded and deafened by the tunnel, feels a body, and leads it outside, only to see all of the others having already exited. On Voya Nui the Piraka meet with Zaktan who is angry that they let the Toa Nuva escape. He orders them to find the Nuva.

On the way to the south, Hewkii finds a Suletu in the ground, and Takanuva tries it on, hearing Hahli's thoughts. They decide to keep the mask. Later the group finds an archway Takanuva cannot pass through. Discovering it also prevents them from going back, the Matoran go on, while Takanuva goes back to Metru Nui.

Meanwhile the Matoran resistance is battling the Toa Nuva. Dalu uses her Chargers to enhance Gali's sight and drives her mad. Kopaka is furious and flash-freezes Velika, Piruk and Kazi. Balta suddenly arrives on the scene and with Onua's help manages to convince the other Matoran to stop the battle. In the Piraka Stronghold, Hakann finds Zaktan with Brutaka and decides to stalk the titan. Elsewhere, Axonn finds Gali and clears her head of madness.

The group of Matoran encounters a mountain and begin climbing it, eventually discovering a Matoran on the rocks above. When they try to reach him, eight Manas emerge from the rocks to surround the group. The lone Matoran indicates for the group to follow and begins up the slope, the Manas following behind. The six Matoran are lead to a canyon where, disturbed by the strange phenomena, they attempt to leave, only to be blocked by Manas.

Traveling on, they encounter a large being who introduces himself as Karzahni and tells the six Matoran how this land, his home, will be their home as well. Jaller is astonished and talks about Mata Nui and Teridax, causing Karzahni to question who they are. The Matoran are stripped of their belongings but as Karzahni commands them to give him their masks, Jaller refuses. In response Karzahni uses his Olisi, showing Jaller how Teridax would have conquered Mata Nui had he not sacrificed himself to save Takua. Shaken and scared, Jaller gives Karzahni his mask.

On Voya Nui, Brutaka sneaks up behind Hakann and asks him why he is following him. Hakann makes Brutaka understand he is willing to go up against Zaktan, and Brutaka offers the Piraka to ally with him if he wrests from Zaktan the control of the Antidermis. The Toa Nuva and Matoran agree on attacking the Piraka, while Avak and Thok search for them in the Green Belt, realizing that the Mask of Life must be near.

In Karzahni the Metru Nui Matoran work in a furnace, except Hahli, whom Karzahni to reveal all of her knowledge of the last 100,000 years to him as she was the Chronicler. In Karzahni's realm, the others find one carving of a Matoran being rebuilt. They decide to leave before suffering the same fate.

In the Piraka Stronghold, Avak imprisons Zaktan, but Hakann bursts in and almost knocks Avak out when Brutaka enters the room. The Nuva and resistance sneak into the Stronghold, Lewa tricking Reidak into opening the way farther in. Reidak sees the battle between Avak, Thok, and Brutaka and, noticing Hakann standing aside, throws him into Avak, causing Zaktan to be freed. The Toa Nuva and Matoran burst into the chamber, but Zaktan makes a deal with Brutaka and the latter smashes the heroes into unconsciousness.

In Karzahni, the group encounters a mad Matoran, who mentions Toa Canisters during his ramblings. He reveals he has another set of six Toa Canisters hidden nearby and he leads Jaller and the others to them. The five Matoran prepare to save Hahli before entering the Canisters. Meanwhile Karzahni thinks he has been deceived by Hahli and carries her to the chamber. At Matoro's provocation, he gives the seven Matoran a vision of the death of Mata Nui with his Olisi, which makes even himself hesitate. Jaller's group uses this moment to climb into the Canisters and escape.

The canisters eventually reach Voya Nui. When the Matoran exit the cylinders, six bolts from the Red Star turn the Matoran into Toa. They accidentally create their spirit stars, allowing the entire island to realize their presence.

"For Doug and Claudia"
— Greg Farshtey