The printable version is no longer supported and may have rendering errors. Please update your browser bookmarks and please use the default browser print function instead.

Tales of the Masks is the fourth book in the BIONICLE Chronicles series and the only Chronicle book written by Greg Farshtey. This book tells the story behind the scenes as the Toa Nuva search for their Kanohi Nuva and face different types of tests. 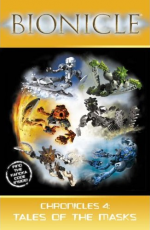