"In the time before time, in the glorious city of Metru Nui, we believed our noble Toa would protect us. But they fell one by one as an unrelenting shadow sought to enforce endless sleep so that he could create a time of dark order, then awaken the world as their conqueror..."
— Turaga Vakama

After successfully delivering the stones to the other five Matoran, Lhikan finds Vakama as he is attempting to forge the Kanohi Vahi, the Legendary Mask of Time. After Lhikan gives Vakama his Toa Stone and warns him of impending danger, he is attacked once again by Nidhiki and Krekka. While attempting to duel Krekka, Nidhiki takes Vakama by the leg and hangs him over a pit of molten Protodermis, threatening to drop the Matoran unless Lhikan would concede. Lhikan surrenders, but Nidhiki still throws Vakama into the unforgiving vat. Lhikan then throws his Fire Greatswords beneath Vakama, who lands on them as if he were surfing, and flies out of battle. However, because of Lhikan's heroism, the Dark Hunters are able to capture him and take him out of the foundry. Vakama, prone to visions, fades out of reality and is able to see a rendition of Lhikan telling him to "save the heart of Metru Nui". Vakama, feeling guilty due to Lhikan's capture, sullenly returns to his workstation.

Vakama then examines the Toa Stone, but is shocked when Turaga Dume, the lone leader of Metru Nui, greets him. Vakama, anxious to be in the presence of his superior, nervously hides the Toa Stone on his desk and acts as if he is working. The Turaga questions him on the status of the Mask of Time, mentioning that he should be using Kanoka disks of higher quality to craft it. After having all of his questions answered, Dume leaves, leaving Vakama to ponder the meaning of the symbols on his Toa Stone's metallic covering. After realizing that it is a map to the Great Temple, he decides to set off towards Ga-Metru to discover the connection between the temple and his Toa Stone.

The six Matoran meet in the Great Temple, and, after a bit of quibbling, place their Toa Stones in the slots of the Toa Suva. They see a ghostly version of Lhikan's mask which speaks to them, warning that Metru Nui's heart is threatened. Through their Toa Stones, the Matoran are transformed into the Toa Metru. The newly-transformed Toa then examine their tools. Toa Vakama has a vision of Metru Nui destroyed and of the Great Disks, the key to saving Metru Nui. This vision leads the Toa to search for the Great Disks.

Onewa finds his disk on a precariously balanced statue in Po-Metru which falls and nearly kills the Toa. Nuju discovers his in an icicle on the wall of a Knowledge Tower. Matau finds his disk in a Force Sphere in a Chute. Whenua finds his in a room in the Archives in Onu-Metru, avoiding a dangerous creature. Nokama recovers hers in an underwater crevice and is nearly eaten by an underwater beast. Vakama recovers his Great Disk in the Ta-Metru Fire Pits, while being attacked by Morbuzakh. However, they are being watched by Nivawk. The Rahi goes off to report to Turaga Dume, who is announcing the disappearance of Toa Lhikan.

The Toa then take the Great Disks to the Coliseum, where they present them to Dume and the Matoran population who are present for an Akilini match. Dume discredits them, and makes them take the challenge of the "Sea of Protodermis". The field is manipulated into waves and the Toa have to make it across. Not yet used to their powers and tools, they fail miserably. Dume halts the spectacle and denounces them as traitors. The field changes into a whirlpool, sucking in Onewa, Whenua and Nuju, who are later imprisoned by the Vahki, while Matau, Nokama and Vakama narrowly escape by collapsing a statue of Toa Lhikan on the Vahki. Vakama sees the Dark Hunters stand next to Dume and suspects that the Turaga has betrayed his city. Turaga Dume is disgruntled and Nidhiki reassures him that the Toa are no threat. Dume retires to his private chambers and converses with a mysterious figure to whom he states that an unspecified plan can be carried out even without the Vahi.

The three Toa travel Metru Nui in search of Toa Lhikan, all the while chased by the Dark Hunters. They escape in a Chute whose flow is reversed by Kongu under the threat of the Dark Hunters. They escape the Chute, Matau accidentally discovering he can fly using his Aero Slicers in the process. Vakama finds that he can join the Great Disks together.

The three fugitive Toa then board a Vahki transport where Vakama has another vision, of a Matoran in the strange spheres they see there. After disembarking in an Assembler's Village, Nokama, Matau and Vakama fight the two Dark Hunters, only for their battle to be interrupted by a Kikanalo stampede. Nokama discovers her mask power, and speaks to the Kikanalo herd, learning that the intelligent Rahi are also against the Dark Hunters, and thus gaining a new ally. The Kikanalo provide information about Lhikan's whereabouts, telling them that the Dark Hunters took him to a place of Unending Whispers. The Rahi allow the Toa to ride them to the canyon. The Toa and Kikanalo lure the Vahki guarding a passage away. The Toa then outwit the Dark Hunters with their help, using Matau's newly discovered mask power and make it into the tunnel leading to the jail where their fellow Toa are imprisoned. The Kikanalo then block the entrance.

The imprisoned Toa Metru meet the Turaga in their cell.

In captivity, after trying unsuccessfully to escape, Whenua, Onewa, and Nuju meet a mysterious Turaga, who sets them to do various tasks. Nuju carries and stacks rocks across the cell and Whenua tries to navigate the room blindfolded. Onewa watches their fruitless efforts and laughs. The Turaga then reprimands him and makes him then carry rocks blindfolded, to the Toa of Stone's shock. While carrying out their tasks, Onewa and Whenua bump into each other. In anger, Whenua tears off his blindfold and calls the tasks a waste of time. Onewa orders the irate Toa to sit down, discovering his mask power of mind control. At the same time, Nuju finds his mask power of telekinesis, tearing a hole in the wall. As the four captives escape into the series of underground tunnels in the Archives, Whenua learns his mask power of night vision. On the way, a Vahki ambushes them, leaping onto Whenua. However, the "Vahki" is soon revealed to be Matau, using his mask. The Toa Metru are reunited, all having learned their mask powers, except for Vakama. The mysterious Turaga then reveals himself to be none other than Lhikan, and with his help, the Toa learn that the real Turaga Dume has been taken captive by Makuta and placed in a Matoran Pod. Makuta plans to force all Matoran into hibernation inside stasis pods, and then awaken them as their ruler. They are then attacked by Vahki, and manage to lock themselves inside a room, where they find an outdated Vahki Transport. They escape the Archives and appear on the surface, only to find that all the Matoran are gone. The Toa and Lhikan then travel to the Coliseum.

"Dume" reveals himself to be Makuta.

After confronting "Dume" who reveals himself to be Makuta, and finding that they are too late to stop him from imprisoning the Matoran populace in Matoran Spheres, the Toa and Lhikan manage to rescue six of the Matoran Spheres from the Vahki, and use their Vahki transport to escape from Metru Nui. They are then attacked by Nidhiki and Krekka, but Onewa defeats them by using his mask power on Krekka, making him grab Nidhiki and hold onto him. Vahki chase after them but are tricked into abandoning the chase when the transport is piloted into the Silver Sea, making it seem like the vehicle had gone under. The Toa and Lhikan traverse the sea while Teridax absorbs the city's energy. He also absorbs Nivawk, Krekka, and Nidhiki, becoming much more powerful and shapeshifting into a greater form. At this moment, the Great Cataclysm takes place. While on the transporter, Vakama finally crafts the Vahi, using the fused Great Disks. When he does so, he has one more vision, which shows him part of the future, as well as recounting all his previous visions. Makuta flies after the Toa, and begins to manipulate the sea of Protodermis that they are floating on, creating large pillars of Protodermis and replicating the challenge the Toa faced earlier. The Toa manage to avoid the huge pillars of Protodermis using their tools.

The Toa trap Teridax in a Toa Seal.

The Matoran Spheres on the beach of Mata Nui

Vakama goes to face Makuta via Nuju's Matatu, and reveals the newly-forged Vahi. Impressed, Makuta offers Vakama the chance to join him. Vakama vehemently refuses and then uses the Vahi against him. However, due to his lack of control, he is unable to move when attacked by Makuta's Shadow Hand. At this moment, Lhikan jumps in front of Vakama and sacrifices himself for the Toa of Fire, leading to Vakama to discover his mask power: invisibility. As Makuta gets hold of the Mask of Time, which was knocked from Vakama earlier, Vakama fires a disk at it, which knocks the Vahi into the Protodermis Sea. Then, using his mask of concealment, Vakama tricks Makuta into grabbing a pillar with his shadow hand and smashing it into his own body. This happens several times before Makuta, severely weakened, prepares for a final attack, which sends a gigantic pillar into him and crushes him against the Great Barrier. Makuta weakly taunts Vakama, and the other Toa then show up and combine their powers to seal Makuta into the cliffside. Just after this, up above, Toa Lhikan's Spirit Star splits into the Toa Metru's six stars. The Toa see this and realize themselves properly as Toa.

The Toa and the sleeping Matoran proceed to the island of Mata Nui, which Vakama proclaims as their home. There is a time gap, skipping over the events in BIONICLE 3: Web of Shadows. Having rescued all the Matoran, the Toa use their powers to awaken them, themselves becoming Turaga in the process. The Matoran exit the pods, and Matoran Jaller is seen with a broken mask. Turaga Vakama gives Jaller Lhikan's mask in place of his broken one. The island is then named Mata Nui in honor of the Great Spirit.

Dialogue was recorded at GGRP Studios in Vancouver, Canada. 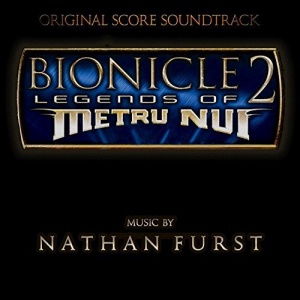 The soundtrack of the film was released December 12, 2017, thirteen years after the movie was released on DVD and VHS.