BIONICLE: Matoran Adventures is non-canon.
The subject of this article is not part of the canon BIONICLE storyline. The information on this page was not approved by the BIONICLE Story Team. Further, it either contradicts canon events or was never referenced in canon media.

BIONICLE: Matoran Adventures is a Game Boy Advance game developed by Argonaut Games and co-published by Electronic Arts and Lego Interactive. The game features Kongu, Jaller, Macku, Hewkii, Matoro, and Onepu, as well as the six types of Bohrok, although the Turaga of Mata Nui could also be recruited as playable characters for the duration of certain levels.

The game takes place during the Bohrok War. It begins with Kongu, who must travel through Le-Wahi to find Turaga Matau and defeat the Bohrok and infected Rahi he meets along the way. He uses his Bamboo Disk to attack enemies and Matau's Elemental Powers to solve simple puzzles. After successfully making his way through Le-Wahi, Kongu meets and defeats a Muaka. He then must make it through Po-Wahi, where he finds Onewa and finds three Priest stones. After finding Vakama and crossing a rapidly crumbling bridge, he learns the ancient song of Ta-Koro and defeats the Kuma-Nui. He then finds Nuju and the Koli statue in Ko-Wahi. Next, he finds the Cave Portals of Ga-Wahi and goes to Onu-Wahi, where he, in darkness at first, finds the torchlight to make his path easier, and defeats the twin Bahrag, thus ending the game. Hewkii, Jaller, Matoro, Macku, and Onepu (in that order) must then make their way through, find their Turaga, defeat Rahi and Bohrok using their Bamboo Disks, complete any other tasks set and defeat larger Rahi as well as the Bahrag.

In the beginning of the game, the player selects one Matoran from a list and plays as them for the rest of the game. Only one Matoran is available from the game's outset, Kongu, and the rest of the Matoran become playable as the pieces of their masks are collected throughout the courses. However, only by finishing the game and replaying it can one choose to play as a different Matoran than the one chosen initially. 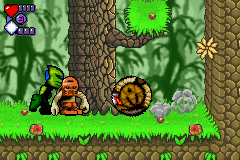 When first entering a level, the player will be alone and must find the Turaga of that level, who then follows the player around. The player can then switch between the two to overcome obstacles. Both Turaga and Matoran share the same health points, so the player can only sustain five health points of damage regardless of whether the Matoran, Turaga, or both sustain the damage. In each level there will four Kanohi pieces that will unlock another playable Matoran if all four are collected before reaching the end of the level.

Movement is dealt with through use of the Game Boy Advance's D-pad and jumping with the A button, whilst switching characters is done with the left or right Shoulder buttons and attacks use the B button. Matoran attack by throwing their Disks which can defeat most enemies after one hit and Turaga with a short-range energy attack that uses up an energy sphere. These energy blasts can be used to break certain walls or floors and activate switches that Matoran cannot.

The player can also increase the Matoran's Disk's abilities by collecting upgrades in the form of more Disks found in the environment. The player begins with one Disk that flies a limited distance before returning to the Matoran's hand whereas the first upgrade obtained has an increased the Disk range. The second increases the range further and causes the disk to fly behind the player character briefly before returning to his or her hand, the third doubles the disk, and the fourth lets the player charge the disk by holding the B button in order to deal extra damage, in addition to being able to control the height of the disk with the D-pad.

Matoran are the main protagonists of the game and the only playable characters capable of damaging foes. Their attack consists of throwing a Bamboo Disk which then returns to the player.

All the Matoran except Kongu are unlocked by finding the mask they wear in the story, which is broken into four parts and scattered throughout each level.

Finding a Turaga and teaming up is mandatory to progress through the game, as they can press down switches and break through walls that the Matoran cannot.

The main villains of the game, they "attack" by rolling back and forth in a ball within a set area. Bohrok stand up and become vulnerable to attacks if one allows them to remain on the screen and roll back and forth a certain number of times. While turning around they are also vulnerable. Pahrak and Gahlok can be destroyed with one hit, Lehvak and Kohrak after two, and Nuhvok and Tahnok after three.

Various Rahi serve as enemies in the game, among them Nui-Jaga, Nui-Rama, and many unnamed Rahi. The "bosses" of the game include a Muaka, a Kuma-Nui, and the twin Bahrag. All of these attack by thrusting their heads forward, with their heads being their only weak point.

Throughout gameplay the player encounters hazards besides enemy characters. Among these are pools of lava (which deal damage at a set rate when the player wades in them), pools of lava too deep to wade that shoot up flames, falling stalactites (which deal one health point of damage if they strike the player), spiked walls and floors, rolling boulders, marshes (which the player can slowly wade through but get progressively deeper) and bottomless pits (which cause the player to lose one life regardless of their health). If one sustains damage when they are missing all four of their health points or falls in a bottomless pit, they are sent back to the last gray Mata Nui statue they touched, which serves as a save point until one loses all of their lives and gets 'Game Over', turns off the game, or proceeds to the next level.

Small yellow Matoran statues can be collected as extra lives to delay getting 'Game Over'.

Objective: Obtain Mystical Priest Stones (items that resemble stone carvings of Matoran). There are three of these in the level.

Objective: Find and return the Torch of Light.