Artakha, also called the Great Refuge, was an island realm in the Matoran Universe governed by the being Artakha, after whom it was named. It was home to the Universe's best Matoran Crafters and the location where many valuable artifacts were made. Artakha was one of the first islands created by the Great Beings during the construction of the Matoran Universe. Artakha chose to govern the realm, which he named after himself. He intended it to be a refuge for hard-working Matoran and a place where no evil could enter.

Once the universe was completed, the inhabitants of the island created various artifacts and objects of power. It was here that Helryx, the first Toa, and the Toa Mata came into existence, using materials provided by the Great Beings. The island was protected from intrusions by flying and marine Rahi created by its assigned Makuta, Kojol.

Eventually, Artakha forged the Kanohi Avohkii. On orders of the corrupt Brotherhood of Makuta, Kojol raided Artakha to retrieve the mask. Kojol's strike force sustained damage from the Crystal Serpents and Artakha's devices. However, the Rahkshi distracted the defenses long enough for the Exo-Toa to deploy, and the island's inhabitants were unable to stop them. Against the Brotherhood's orders, Kojol himself entered the fortress and took the Avohkii.

After Kojol's raid, Artakha asked that the Order of Mata Nui remove all traces of his realm's existence. The Order complied, commissioning Tobduk to eliminate everyone who knew where the realm was located (including Order members and Kojol himself). The Order also destroyed all existing maps showing Artakha. Meanwhile, the residents of Artakha destroyed a larger, uninhabited island nearby, along with the land bridge that used to connect them.[2]

Some of Artakha, particularly Artakha's fortress, was damaged in the Great Cataclysm. However, the island's inhabitants quickly repaired the damage.[3]

As part of their mission to prepare the world for Mata Nui's awakening, the Toa Nuva were invited to Artakha. Its ruler sent a Matoran to greet them on Daxia, and then teleported them to Artakha. The Toa were greeted by a welcoming sight of a tropical island with delighted Matoran. Shortly thereafter, the landscape changed rapidly, as storms raged and the plants they had seen shriveled and died. Eventually the Toa arrived at Artakha's fortress, where they were asked by Artakha for details of their recent deeds. When the Toa finished their tales, Artakha presented them with Adaptive Armor, and teleported them to Karda Nui.

After Teridax took over the Matoran Universe, he sent Rahkshi to Artakha to eliminate its ruler. Toa Nuva Lewa arrived to ally with Artakha in the fight against the Makuta, only to find the island nearly overrun and its Matoran defenders losing the battle. Lewa prepared to rescue the land's ruler, but Artakha telepathically commanded him not to, instead sending him to Tren Krom's island to seek that being's aid against Teridax. Artakha later left his island to stop the battle going on in the Core Processor.

Following the Battle of Bara Magna, the Matoran on the island evacuated to Spherus Magna. Later, Artakha, along with all other locations in the Matoran Universe, was dismantled.[4][5][6]

In an alternate universe, Artakha's ruler kept the Great Disks for experimental purposes, and eventually forged the Kanohi Vahi. Tuyet, leader of the Toa Empire, sent Jaller and two Toa, Bomonga and Kualus, to Artakha, where they confiscated the Vahi. 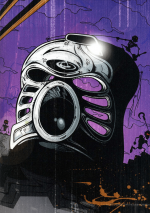 Artakha was a land of advanced technology, filled with modern cities. Many other cities, such as Metru Nui, were based on Artakha's design. In the center of the island was an enormous sculpture of a Kanohi Hau. The rest of the geography was always changing, as Artakha was able to change it to look however he pleased by using a mechanism on the island. Artakha was damaged during the Great Cataclysm, but was repaired very quickly.

Artakha himself resided in a fortress in the center of the island. Even the fortress, however, was able to change its appearance to suit its owner's fancy. 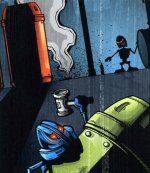