"But the ocean remembers. Like history, the water holds many mysteries within its forbidden depths. It surrounds Mata Nui and covers it; it watches the island as it sleeps, and remembers."
— Turaga Nokama, Mata Nui Online Game

Aqua Magna, or Great Sea, also known as the Endless Ocean by the former inhabitants of Mata Nui, is a giant ocean located on Spherus Magna.

The formation of Aqua Magna

The Great Sea was a location on Spherus Magna and was ruled by the Element Lord of Water.[1]

More than 103,000 years ago, before the collapse of the Iron Tribe, the Agori Sahmad came to the shores of Aqua Magna to scout out a trade route for his tribe, and was struck by the ocean's intimidating majesty.[ST, Ch. 7]

Over 100,000 years ago, the planet Spherus Magna shattered due to structural damage caused by Energized Protodermis. A portion of the planet, containing water, eventually developed into its own planet and begun to orbit around Solis Magna.[2] A small moon came to orbit around Aqua Magna.[C15]

The Great Spirit Mata Nui was passing by Aqua Magna when he was cast into sleep by the Brotherhood of Makuta, making him fall down from space. Mata Nui's impact from hitting Aqua Magna caused huge tremors throughout his body, an event referred to by his inhabitants as the Great Cataclysm. This also triggered and damaged his Energized Protodermis camouflage system, causing the creation of an island later named after him.[3] The cataclysm also caused the island of Voya Nui to burst out of Mata Nui's body and land on the oceanic surface of the planet. Another result was the shattering of the Pit beneath the surface of the planet, resulting in the deaths of several prisoners and its guard, Hydraxon.[4][TMDoTT]

Mata Nui stayed on Aqua Magna, comatose, for around 1,000 years. The city of Mahri Nui on Voya Nui broke off and sank into the sea, where it stayed for the next 300 years. Various inhabitants escaped to the ocean surrounding his body,[4] though most were later captured and brought back.[citation needed] Voya Nui was eventually sent back to the Southern Continent by the Toa Mahri, destroying Mahri Nui on the way. Shortly before Voya Nui's return, Mata Nui died, and his spirit was replaced by the essence of the Makuta Teridax. Mata Nui was soon resurrected by Toa Mahri Matoro, but remained asleep.[5] 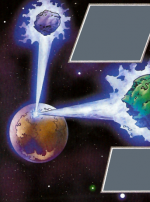 Soon after, the Great Spirit Robot was awakened and stood up, causing the destruction of the island of Mata Nui.[TR][6][7] Teridax, now in control, contemplated vaporizing the entirety of the planet's ocean.[RoS, Ch. 4]

After becoming familiar with his new powers, Teridax departed from Aqua Magna for Bara Magna.[GC5] During this time, Mata Nui's consciousness entered the Prototype Robot and began pulling Aqua Magna towards Bara Magna to reform Spherus Magna. However, this task was interrupted when Teridax arrived on the desert planet and engaged Mata Nui in combat. Mata Nui was able to redirect one of Teridax's gravity attacks at Aqua Magna as well as Bota Magna, pulling the planets further into Bara Magna's gravitational field until they fell irreversibly. The Aqua Magna satellite went through the atmosphere, and a fragment of it broke off. This fragment impacted the head of Makuta Teridax, killing him. The rest of Aqua Magna collided with Bara Magna along with Bota Magna and reformed Spherus Magna. Immediately afterwards, Mata Nui revitalized the entire planet, in the process causing a mass proliferation of underwater flora and curing the mutated beings within the ocean.[8]

After migrating from the damaged Great Spirit Robot, several Toa of Water, including Gaaki, worked to bring the aquatic Rahi in the Matoran Universe into the ocean of Aqua Magna.[TPTB, Ch. 1] The Golden-Skinned Being created a fortress in the cliffs on the Aqua Magna shore for the Skakdi.[RoS, Ch. 12] Annona later teleported to the fortress in search of dreams to feed on, followed by Sahmad, Telluris and Metus. The gold-skinned fusion emerged from the fortress and, after fighting Annona to a stalemate, agreed to send her to another world.[ST, Ch. 7]

Aqua Magna as seen in BIONICLE: The Game

Aqua Magna's surface was completely covered by an ocean, devoid of any land mass.[citation needed] After Mata Nui crash-landed on the planet, two islands came to exist on the surface: Mata Nui and Voya Nui.

After emigrating from the Matoran Universe, the Golden-Skinned Being created a massive fortress among craggy stone cliffs on the coast of Aqua Magna. The fortress was inhabited by an army of Skakdi and their servitors, the Toa Mahri.[RoS, Ch. 12]

During the Battle in the Skakdi Fortress, the fortress was dissolved by the dreams of the maddened Skakdi.[ST, Ch. 7] The Skakdi Fusion later recreated the fortress once the excitement had passed.[9]

The Red Star[MNOG] and smaller rock fragments orbited the celestial body, along with a larger satellite.[C15] Lehvak-Kal[C12] and a small horde of Tahnok[C11] were also thrown into a low orbit around it.[10] [citation needed] When the planet was reformed, the blasts of gravity power from Mata Nui and Makuta in the Battle of Bara Magna, as well as the movement of Aqua Magna accelerated the process of orbital decay and they were eventually destroyed.[11] 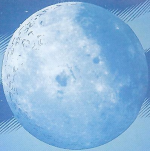 A moon in orbit around Aqua Magna

An aquatic species on Aqua Magna

"I came to the shores of Aqua Magna once in my life, back when I had a life. And a tribe, friends, and love. I was there to scout a trade route. Coming from the mountains, I had never seen so much water before. Even though the shoreline was rocky and desolate, it still looked like the most amazing - and in some ways, terrifying - thing I had ever seen."
— Sahmad, Sahmad's Tale