Following the Matoran Civil War on Metru Nui, Antroz was assigned to supervise the island of Xia.[4][citation needed]

When Teridax demanded a Convocation to reveal his plan and claim leadership, Antroz was one of the first to side with him.[5]

Like the other Makuta, Antroz evolved beyond the need of a physical body, turning into a simpler form of Antidermis within armor. The Nynrah Ghosts, ordered to Destral by Teridax, helped modify his armor to accommodate for the new virus-like form.[6]

Before the Brotherhood was discovered to have turned into a malevolent organization, Antroz had a team of Toa Hagah assigned to him.[7] After Toa Norik and his team rebelled against Teridax, many of the Brotherhood's Toa Hagah were killed, while others managed to survive. It is unknown which fate attended Antroz's team.[8][9]

Antroz was chosen to lead the Makuta to invade Karda Nui,[10][11] a sign of his high rank within the Brotherhood. Their goal was to transform all Av-Matoran into Shadow Matoran to prevent the creation of any more Toa of Light, and control Mata Nui's situation. Antroz attempted to ask Icarax, who rejected to be the part of the assignment, to join them. However Antroz gave up trying to convince him to do so.[12] 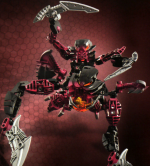 Later, when the Energy Storms began, Antroz attempted to have Bitil assist him out of Karda Nui, which Bitil refused to do. He was then killed by the storm.[13]

Being Teridax's primary lieutenant,[14] Antroz was one of the Brotherhood's most skilled tactical commanders and an accomplished warrior.[13] Unlike Teridax, he did not underestimate his foes, and was very aggressive when fighting. Skilled in tactics as he was, when he personally fought Antroz still preferred to conquer his foes by sheer force rather than using his powers.[15] He also had a rare sense of honor for a Makuta, opposing cheating and deceit and wishing to win a fight fairly.[13][16]

8691 Antroz was released in early 2008 as one of the three Makuta Phantoka canister sets. The set contained fifty-three pieces, including a black and dark red Kanohi Jutlin, blended from two colors as was the case with most Makuta masks. Pressing a button on his back could open his ribcage to release a Tridax pod, holding the set's four Shadow Leeches. Antroz, along with the rest of the canister Phantoka, could "link-up" with his corresponding Matoran set. The set could also be combined with 8947 Radiak, 8686 Toa Lewa, and 8944 Tanma to create the Spiriah combiner set.

A large model of Antroz in his Phantoka form, constructed entirely out of LEGO System Bricks, was made available for promotional use, most notably at the 2008 New York ToyFair.