"The Agori, or villagers, of the world of Bara Magna are a tough, independent breed. In a place where every day is a struggle to survive, they have learned to use what they have around and rely on their wits."
— Narrator, The Fall of Atero

The Agori are a species native to Spherus Magna.

The Agori originally lived on Spherus Magna, and were a populous species on the planet. They organized themselves into a tribal system, and were governed by the Great Beings. Unable to handle leading the population, the Great Beings chose six warriors and gave them Elemental Powers, creating the Element Lords. The Element Lords eventually became leaders of the tribes, and commanded the villagers.

103,000 years ago, the Iron Tribe was stricken with a mysterious plague, and reduced to only a few members. The Agori shunned those members, out of fear that they might still carry the disease.

After the discovery of Energized Protodermis, the Element Lords began sending their tribes to fight for control of it. Most Agori did not participate in the war, and acted as support to the fighters of their tribe.

Following the Shattering that destroyed the planet and ended the war, the Element Lords were trapped, and a large number of Agori were isolated on Bara Magna. In order to prevent global fighting, the Agori created a social system which involved hiring Glatorian for the different tribes who would fight in arenas, and the tribe that hired the victor gained access to whatever resources were in dispute.

One tribe of Agori, the Zesk, began to devolve to a more primal state, along with the Glatorian in their tribe.

A number of Agori were also stranded on the planetary fragment of Bota Magna. These Agori used the natural resources of plants and wood available to fashion armor and weapons for them to use.

Agori who are on their own in the wastelands were often captured by Bone Hunters or Sahmad and sold to the Skrall as slaves. Many of these Agori were imprisoned and forced to work in Roxtus repairing the Skrall's weapons and armor. 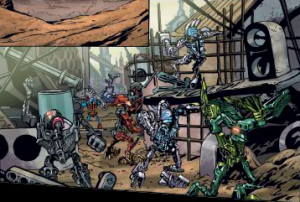 Many Agori traveled to Atero in order to view the Great Tournament. During the first round of the tournament, the Skrall invaded the arena, killing Glatorian and Agori. Several Agori managed to escape, and returned to their villages to report the news.

The Agori continued to follow the social system, despite the looming threat of the Skrall. During a scheduled match between Tarix and Vastus, a new warrior, Mata Nui, informed the assembled Agori of the alliance between the Skrall and Bone Hunters. The Agori were reluctant to trust the newcomer, but Ackar convinced them to believe his words. The Glatorian insisted on uniting the villages, and the Agori set about combining the structural pieces of the villages to create a Mega-Village. Raanu, head of the Fire Tribe, became the overall leader of the new city.

Soon, Mata Nui returned from a journey from the north with a power source, intended to power the Prototype Robot that the Mega-Village was made of. Raanu eventually agreed to let him energize the robot and the Agori safely evacuated from the city before Mata Nui took control of it.

Mata Nui warned the Agori to take shelter and the Glatorian led them to some caves. Soon after, Teridax arrived and confronted his opponent, lifting the mountain protecting the Agori with the intent to drop it on them. Mata Nui interfered with his plan, destroying the mountain and told the Agori to escape. Raanu then quickly began to move his people east, under Ackar’s request. Some Agori, however, tried to help in the fight against Teridax and his minions.

After Teridax was defeated and Spherus Magna reformed, the Matoran, Toa, and other former inhabitants of the Matoran Universe joined the Agori on the planet to begin a new life.

Around this time, Toa Lewa, who had been teleported to the Bota Magna prison cell of the Great Being cursed by the Mask of Life, left the Being's prison to explore his surroundings. He was captured by a group of Agori bearing spears after trying to warn them about a nearby gigantic biomechanical reptile. The Agori were seemingly threatened by his apparent origin being the prison tower.

As a new life was being made with the Matoran, the Agori tribes had trouble working together after so many years of competing. The Agori also had mixed feelings toward the Matoran as the new inhabitants began to settle in. Toa Tahu and Glatorian Ackar and Kiina soon began working to resolve these disputes among the Agori and Matoran.

On an alternate Spherus Magna, the Agori's planet was reformed and the Matoran Universe's inhabitants joined the Agori in living on the planet.

Like most species living on Bara Magna, Agori are completely organic with some mechanical implants. They have a metallic bone structure. Agori are hardy workers, and can adapt well to changes. The world they were left in following the disaster that destroyed the planet made them very cynical, and they grew disillusioned to many aspects of life.

The Agori are also very resourceful, and excel at repairing objects. However, due to the major social shift that followed the Shattering, they have lost the ability to create new things.

A Zesk, Metus, and Berix

Most tribes have an Agori leader, who are elected by their fellow tribe for two hundred fifty year terms. However, the leader can be removed at anytime via a unanimous vote in the tribe. Raanu has been given overall command of the tribes in the single city.

Agori on occasion give Honor Badges to Agori who have aided them in some way to recognize acts of battle and courage. These badges show Agori and Glatorian of other villages the trust the Agori have placed in the bearer.

Though they could not fight on their own in arenas, Agori were permitted to team up with a Glatorian to fight. Agori also used vehicles to battle in the arena. As a result of the arena fights, Agori encouraged friendly relations with one another.

Six Agori were released as small sets in early 2009, each consisting of thirteen to seventeen pieces.

Agori sets can be used alongside Glatorian sets in one variation of the two-player BIONICLE Action Figure Game, instructions for which are available on BIONICLE.com. The Agori serves as a shield for the Glatorian just as they do in story, with either player firing their Glatorian's Thornax Launcher at the opponent's Agori to remove it from play. A player can return their Agori to play by firing their Glatorian's Thornax Launcher at its own canister. A player with an Agori in play is able to fire his or her Thornax Launcher twice per turn.

Agori also appear as pilots in the large boxed sets Cendox V1, Kaxium V3, and Baranus V7. In these sets, they are intended for use with the Action Figure Game's rules for vehicle and creature sets rather than the rules for Agori sets. In some vehicle sets, like the Cendox V1, the pilot Agori is outfitted with the set's life counter, while in others the life counters are fitted on the vehicle.